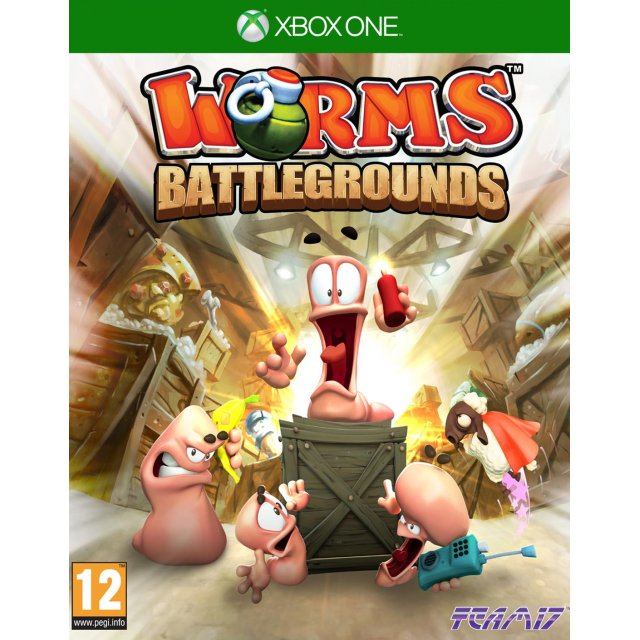 Works on all systems sold worldwide, a correct regional account may be required for online features.
24h In stock, usually ships within 24hrs.
US$20.99
Our previous price:US$ 24.99
You save: US$ 4.00( 16% )
Manufacturer
Team 17
Compatible With Xbox One™ (XONE™)
Version

Works on all systems sold worldwide, a correct regional account may be required for online features.
24h In stock, usually ships within 24hrs
Price
US$20.99
Our previous price:
US$ 24.99
You save:
US$ 4.00( 16% )
Play-Asia.com Return & Refund Policy

Earn 42 Coins for the Loyalty Program (beta-test)!
Trustpilot
Trustpilot
Click on a thumbnail to see more pictures for Worms Battlegrounds

The Biggest Worms Title to Date:

Get ready for the most explosive entry for world domination in Worms Battlegrounds! Team17 will be bringing their longstanding Worms franchise to the PlayStation 4 and Xbox One, bringing the best Worms game to date with more worms, larger landscapes, dynamic water, weapons and customization!

Worms Battlegrounds will feature beautiful high definition 3D visuals while retaining its unique cartoon look. Destroy your enemies with over 200 customization items and four improved Worm classes with new special abilities. Worms Battlegrounds also takes players into different periods of history, from the prehistoric era to Incan Ruins and all the way to the Industrial Revolution. The game will feature a total of 65 weapons and utilities - the most in any Worms franchise, such as the Winged Monkey, Mega Mortar and Whoopsie Cushion.

For the first time in the series, Worms Battlegrounds will feature Full Online Multiplayer Integration that fans have been asking for. Also, a fully featured Clan Support and League Play adds up to the excitement giving the players the experience like no other Worms title before!

If you are familiar with Worms Battlegrounds, why not let others know?