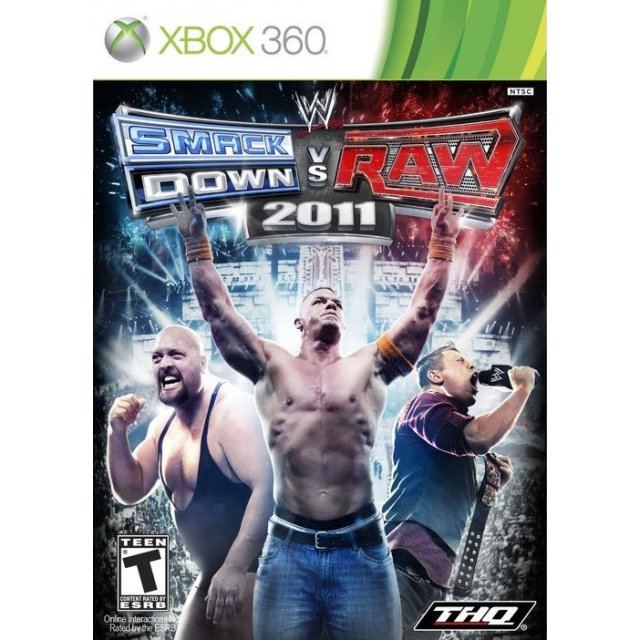 Collections
THQ
Rated
By Our Customers
Compatible with Xbox360™ (X360)

Works on all systems sold worldwide, a correct regional account may be required for online features.
1-2w Expected stock arrival within 1-2 weeks.
US$37.99
Our previous price:US$ 62.40
You save: US$ 24.41( 39% )
Manufacturer
THQ
Rated By Our Customers
Compatible With Xbox360™ (X360)
Version

Works on all systems sold worldwide, a correct regional account may be required for online features.
1-2w Expected stock arrival within 1-2 weeks
Price
US$37.99
Our previous price:
US$ 62.40
You save:
US$ 24.41( 39% )
Play-Asia.com Return & Refund Policy
Click on a thumbnail to see more pictures for WWE Smackdown vs Raw 2011

WWE SmackDown vs. Raw 2011 will empower players more than ever to define their destiny and gameplay experiences in a dynamic and ever-changing WWE. Along the way, your decisions will decide gameplay scenarios, allowing for more spontaneous WWE action in and out of the ring. Enjoy a greater level of interactivity that allows you to customize your WWE experience and control your destinies in all-new Road to WrestleMania story-driven campaigns.WWE SmackDown vs Raw 2011 will deliver its largest offering to date of fan favorite, best-in-class Community Creation features. Players will have more creative tools than ever to customize their Superstars, finishing moves and story designs. In addition, searching and sharing content will be greatly simplified with improvements to the highly regarded WWE Community Creations feature, which generated nearly 10 million downloads, including more than 7.5 million Created Superstars, 500,000 story designs and 500,000 finishing moves in its franchise debut.Always 100% WWE Authentic, WWE SmackDown vs. Raw 2011 will boast one of largest rosters in franchise history with more than 70 of today’s most popular WWE Superstars and Divas. Each Superstar will feature new skin textures and movement technology, delivering the most authentic looking and moving Superstars and Divas ever seen in a WWE game. In addition, a new physics system will ensure all matches and object interactions look and feel unique, dynamic and unpredictable.You’ve seen the Superstars’ greatest moments on WWE programming. You’ve shared them and lived through them on television, on the web, and at the arenas. Now, it’s time for you to define your ultimate WWE moment, in the most interactive experience in the WWE Universe. This is your moment.

If you are familiar with WWE Smackdown vs Raw 2011, why not let others know?

jncfoo (103) on 07, Feb. 2013 11:24 (HKT)
WWE Swansong
This could be the last WWE for a while... Overall it is an OK game. For fans of wrrestling definitely
[This review is based on another version of this product]
ongck123 (49) on 06, Mar. 2011 23:09 (HKT)
Great Wrestling Game
A wrestling title to own.
[This review is based on another version of this product]
samuel1989 (7) on 23, Dec. 2010 17:42 (HKT)
Awesome game!
WWE Smackdown vs Raw 2011 is an awesome game! With a new WWE Universe mode replacing the low-down, old Carrer mode (in SvR'09&'10), it is best Carrer mode I've ever seen.
Along with a new Road to Wrestlemania story featuring 4 Superstars with a goal: break Undertaker's WM streak without needing a created Superstar. The game will sure produce awesome sales!
yousef1 (2) on 14, Dec. 2010 16:18 (HKT)
loving and hating
a great game for single player, story mode is awesome plus online game is cool, side back that its only made for one player not multi. the old game we played for the titles when ever we want but in this one we cant, another disappointment is that you cant kick out easily from some stupid punches like you can be pined with only a knock
other than that it is a great game, oh almost forget you can download the best superstars from creat a wrestler from the download mode and you can put the titotron and entrance music but the wrestler movement to the ring need some configurations
i hope 2012 is better and i hope they bring multi user for season mode
haaa
[This review is based on another version of this product]
SK (101) on 22, Nov. 2010 22:53 (HKT)
Another worthy addition to the SvR franchise. The highlight of 2011 would be the new physics system which allows objects to be used more realistically along with the WWE Universe mode. Universe mode is an innovative addition to the franchise, replacing the career mode from previous games. Universe modes attempts to integrate rivalries based on your matches in addition to adding cut-scenes into the mix. Unfortunately, the game is not without its faults. The commentary is less than stellar and in many instances, simply inaccurate and nonsensical. Furthermore, the Road to Wrestlemania mode which claims to give you more freedom in gameplay, is in fact, extremely limited and at times the 'freedom' feels pointless. Notwithstanding such flaws, fans of this franchise will still find it to be a very enjoyable experience.
1 »