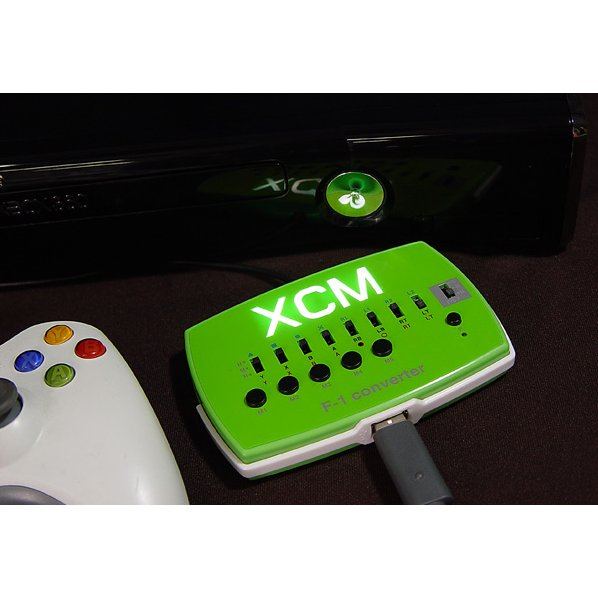 After received many gamer requests to develop a converter for a G25/G27 racing steering wheel to be used on the Xbox 360™ and Xbox 360 Slim™ console, we are glad to tell you that we have successfully made a converter. The converter is not only compatible with the G25/G27 racing steering wheel but also includes a built-in combo attack memory function for fighting games. You just simply press one button to execute the complicated combo attack with ease. Don't miss your chance to own one!

If you are familiar with XCM F-1 Converter, why not let others know?

nlkn2003 (3) on 13, Apr. 2013 13:18 (HKT)
Perfect
Perfect to use G25 27 with Xbox360
brent.speicher (1) on 26, Oct. 2012 19:56 (HKT)
Very happy with the purchase
This device works great with my Logitech G25 wheel. I finally get to play Project Gotham Racing 4 with my steering wheel. The only problem I have encountered is the mapping of the buttons in most games for the paddle shifters. If you configure the controller configuration that works with the paddle shifters, it turns out to be the opposite of most PS3 games. Shifting up and down is reversed, but you get used it after a while.
drakar750 (1) on 29, Aug. 2012 23:18 (HKT)
Dont work. Bad support from XCM
My XCM f1 don't work right in my xbox 360 slim. I'm try to play Forza4 and works very poorly. Several problems. XCM support replied me some times with no solution and now I have NO more response from XCM.