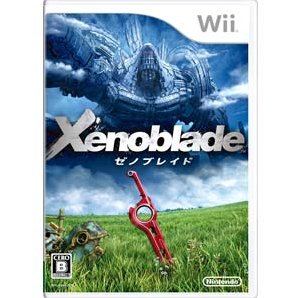 
Click on a thumbnail to see more pictures for Xenoblade

In the distant past, when the world was still covered in endless blue, there were two gods - the machine god and the giant god. To decide who gets to rule this world, the two fought each other until death. Land surfaced years after the war, and later, human civilization flourished. But peace didn't last, for machine soldiers appeared. Set in an alternate world where the middle ages meets sci-fi, this is another war that ends all wars. The game uses an action battle system that allows you free movement. Hit your target and run from his hit range, or combo him with your two other party characters. If your party gage is full, you can activate arts that could severely weaken your opponent. One of the most useful features is the premonition system, for a few seconds after the battle started, you could see what fatal damages your enemy could do to your party. To change the future, you have to defeat the monster before he gives you that lethal blow.

If you are familiar with Xenoblade, why not let others know?

uredream (179) on 31, Aug. 2011 09:18 (HKT)
Wii-Saver! Excellent Gaming Experience for sure.
My wii has been sleeping for a while until this game arrives. Typical JRPG satisfies what I really needed.
Every details are well-designed including BGMs.
This title gives me good opportunity to turn on Wii.
Gendo (1) on 11, Aug. 2011 16:04 (HKT)
Excellent game! Fantastic sense of freedom and adventures! My recommendations to everybody. Playing in Japanese is hard but still possible.
mbmah (32) on 15, Apr. 2011 01:23 (HKT)
Some flaws but otherwise artistic
I wasn't sure what to say at first because some of the graphics in the previews for this game left much to be desired, however the environment and gameplay changed my mind. It's one of those hidden gem RPGs that you have to delve deeper into in order to enjoy.
frumply (48) on 23, Jan. 2011 02:47 (HKT)
why JRPGs should never have gone HD
Xenoblade shows us what can be made when developers aren't forced to make things look pretty just on the surface. JP developers can't depend on 3-4million sales, and therefore xbox/ps3 titles have suffered from being as hollow as you can get compared to, say, Dragon Age or Fallout. The inherent beauty of the scenery isn't diluted by any means simply because it isn't in HD, and the game is chock full of content. Not saying I didn't enjoy the 360 JRPGs that have been released as of now, but I wonder what could have been of some of those games if they were able to expend resources elsewhere.
cold51 (1) on 06, Jan. 2011 05:45 (HKT)
Best RPG of the gen
Really awesome, dinamic BS, excellent music and sound, good storyline and more, more freedom!!!
1 »