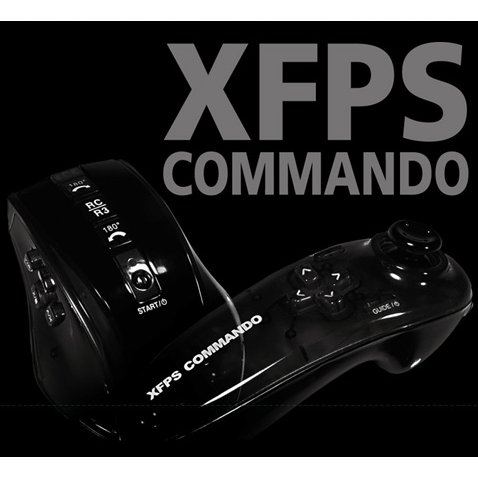 The XFPS Commando is designed for First Person Shooter games. Different from our previous XFPS adapter versions, this device is designed to be used with our own mouse and controller. It is compatible with Xbox 360TM, PS3 TM and PC. It features a wireless design, faster moves 180° across the scene,compatible with xbox 360TM headset , sensitivity adjustment, etc.

If you are familiar with XFPS Commando, why not let others know?

e33rjdswjz (1) on 11, Feb. 2011 07:13 (HKT)
By no means perfect, but worth trying out
When I got the Commando, there weren’t really any independent reviews online anywhere and decided to take the chance and spend $99 anyway. After using it for a month, I’d say my reaction is ‘mixed.’

I am a PC gamer at heart and finally got an Xbox360 and played Call of Duty: Black Ops and wished I had a mouse so I could be as good as I was on PC. Commando gets me part of the way there, but it isn’t perfect.

A quick word to the wise before my review- As the product clearly states, you also need to buy a wired controller to plug into it. I had read online elsewhere that you can’t use a Microsoft controller, that won’t work, you have to use a 3rd party controller. I got a 3rd party controller by GameStop, but that didn’t work. I then went to shopko and got a controller by “MadCatz” from a local game store and that worked fine. Just be advised to keep your receipt and be prepared to return whatever controller you get to find one that works.

The Pros:
• I picked the Commando over the other options because I liked the idea of the left hand nun-chuck rather than needing a keyboard. In retrospect, for my personal gaming preference, having a keyboard to map more buttons to all right at my fingertips would have been more helpful. However, the nun-chuck movement works smoothly and is very similar to movement on a normal controller.

• The movement of the mouse feels fairly smooth compared to the reviews I’ve read about earlier attempts over the years at creating mice for the xbox. There isn’t a “dead zone” that other devices have. It still doesn’t feel exactly like the mouse on a computer, but it is certainly easier for me to use than a normal analog stick controller for aiming the sniper scope.


• Reprogramming the buttons to your custom liking is very easy, there are youtube videos that show you how to do it. I wish you could reprogram the 180 degree button though.

• Switching between using the wired controller and the Commando mid-game is very easy which is helpful.


• The fact that it is a ‘plug and play’ is a big plus. Most other keyboard/mouse options require more of a setup process that involve your computer as well. Commando is very straight forward.

• I’ll leave the ‘pros’ at that. For a full list, just read the manufacturer’s features list, it is pretty straight forward.

I’ll focus more on the cons since that is the stuff you can’t find elsewhere. I’m not attempting to be overly critical, just point out the things I’ve noticed.

The Cons:
• Cheap construction- When I pressed the xbox ‘menu’ button on the left nun-chuck, it actually got stuck down into the device and wouldn’t pop back out, rendering the whole thing useless. This happened on Day 1. I was able to stick a small screw driver under the lip of the plastic and eventually pop it back out. It happened again a few weeks later and I was once again able to pop it back out after some work.

• Left nun-chuck controller also looses wireless contact with the receiver from time to time. So I’ll be playing a game and then suddenly stop moving. If I waive it in the air a bit, it connects again and I can move. Not ideal but possibly just a glitch with my controller. Once I moved the receiver closer to where I was sitting, these problems have become more infrequent.


• The mouse design- There have been a few odd design choices that I think made this mouse much less useful than it could be.

o First, it has two “180 degree turn” buttons in the middle of the mouse where a standard mouses’s third wheel would be. I’m not sure why you would need two 180 degree turn buttons… why not just one? If I’m trying to turn quickly, why would I care about turning left or right? Another flaw in this is that the 180 degree turn is by no mean rapid. I imagined running past a bad guy, and being able to spin on the spot to shoot him in the back. But, the way the Xbox works with the commando, you can only turn as fast as you could have by simply holding the joystick on your controller all the way left or right. So it really isn’t all that faster than mousing left than right.

o However, my biggest complaint is that these two 180 degree buttons are placed incredibly poorly. The bottom one is in a spot your finger can’t reach without lifting it off the mouse. The top one is very very easy to reach… which is too bad, because it is right next to the ‘RC’ button, which is the equivalent to pushing the right analog stick in. in Call of Duty: Black ops, this button is the “melee button.” So more often than not, I run up to a bad guy and attempt to melee him, and instead hit the ‘180 degree’ button and just spin around in a circle. While I’m sure to my opponent, my pirouette is intimidating (in that they may accidently die of laughter) it so far has not prevented them from simply killing me mid spin once they get over their confusion.


o Unfortunately, while many of the buttons on the commando can be reprogrammed, these two 180 degree buttons are not re-programmable so you must work very hard to not accidently hit them and there isn’t a way around it. Kind of reminds me of playing Call of Duty on my computer and periodically accidently hitting the ‘windows’ key which would suddenly minimize my game and take me back to my desktop and there was nothing I could do to stop it.

o The final problem is the weight. The mouse is a little heavy compared to a normal computer mouse. Plus, the X/Y/A/B buttons are on the side where your thumb goes for easy reach. These two combinations have lead me to attempt to quickly move the mouse left and right, have to grip the mouse a little harder to get its inertia moving, and then accidently hitting one of these buttons in the process. Thus, while I’m firing down a the site of my gun while tracking a target, I’ll accidently hit the reload button. This doesn’t happen to frequently, but again, I feel a better design would prevent this.


• Mouse speed:
o To be clear, this isn’t a flaw with the Commando, but with all mouse/keyboard products adapted for the xBox- your range of movement is limited to what the controller’s analog stick could do since all this product is doing is sending fake analog stick movements to the xbox. So unlike your computer mouse playing Call of Duty, there isn’t a way to be able to make a swift 90 degree head turn, but also be able to fine tune adjustments in a sniper scope. You don’t have that range window. So you can set the game’s ‘look speed’ high and spin around fast, or low and have finer movements, but not both. This is the part that I miss most about playing FPS on computer and was hoping to recreate with this product. But it isn’t meant to be.

• Headset issue: This works with a wired headset. I have the generic wired headset that Xbox makes that you can buy at best buy. It may be a fluke of my model but while the microphone works fine, the earphone doesn’t work with the Commando- all I get is a weird stuttering sound in my ear when people speak. The easy work around is to change the xbox settings to play all headset audio through the TV’s speakers rather than the ear peace. Hopefully this is just a glitch that can be fixed an a future firmware update. But again, there is at least that workaround.

Conclusion:
In the end, I’m still not sure what I think. For $99 I would have liked a flawless product. (That’s only a little less then I spent on my entire refurb’d Xbox). However, I also realize this sort of mod-ware is on the edges of design limits since it isn’t sanctioned by xBox and I’m not going to look a gift horse in the mouth too much.

Perhaps I was hoping for too much- that with this controller I’d suddenly see my skills double and I could get to a place where I felt I was as good as on my computer and the ‘good ol days.’ But in the end, while I definitely prefer it during FPS games to a controller, it still isn’t quite as good as playing FPS on my computer.

Some days, I find myself curious about whether I’d be happier with an actual keyboard/mouse style instead of the Commando (maybe something like the “xfps Live”) but I don’t really want to spend another $90 to just test it out. It may help with some of the button layout issues, but I don’t imagine the mouse spouse experience changing all that much.

Despite that long list of Cons that I hope the manufacturer can fix at some point, I am glad I got the commando and would recommend others give it a shot.
eudoros (1) on 23, Jan. 2011 22:59 (HKT)
Bad support of the old headset, bad overal quality
- The plastic is cheap, the left analogic stick seems fragile.
- The headset connected on the XFPS is full of parasite.
- If you play without headset, the gameplay is nice, not perfect but nice. Slow movement are not perfect. Hard to snipe with the mouse.
- You need a cord joypad with all the buttons if you wish to custom the keys. A MadCatz Street Fighter 4 joypad/stick isn't enough.
- Also you cannot play with the connected joypad AND with the mouse. You MUST use the bad quality remote.

I ask to the constructor to make a new firmware to resolve these problems, I am still waiting.

Don't buy it, wait for XFrag, they are thinking about something better for Xbox.

I am disapppointed, and I don't play with it. I lost 99$
I prefer the MadCatz Black Ops joypad.
If they correct their firmware, I will correct my review.
stevenrsvl (354) on 11, Jan. 2011 10:34 (HKT)
FPS advantage!
Works like a charm!
Only wish they shipped a keyboard and not a Wii Nunchuck joystick.
Eitherway; nice product!