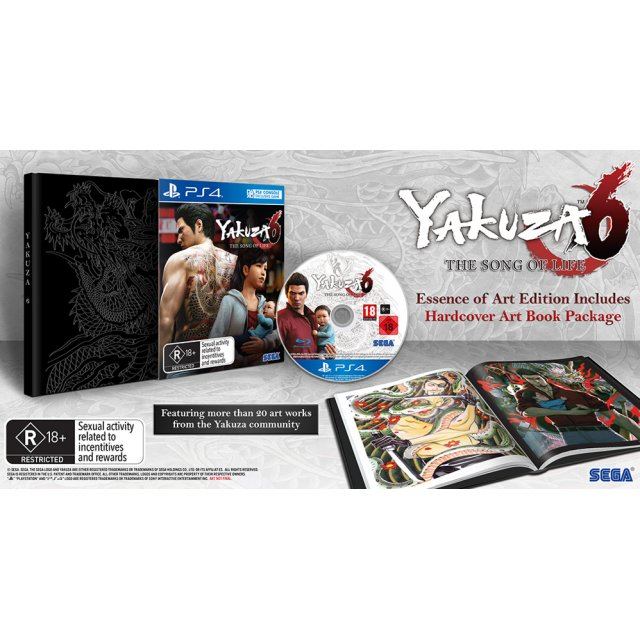 
Click on a thumbnail to see more pictures for Yakuza 6: The Song of Life [After Hours Premium Edition]

In Yakuza 6, Kazuma Kiryu will find out exactly how much people are willing to sacrifice for family - be those ties through blood or bond - when he investigates a series of shadowy events that involve the ones he holds closest to his heart. Fresh out of a three-year prison sentence, an older and weathered Kiryu comes to find out that his surrogate daughter, Haruka, has gone missing from the orphanage he looks after. The trail leads him to his old stomping grounds in Kamurocho, where he discovers that she has been struck by a car and now lies in a coma. To make matters worse, Kiryu learns that Haruka now has a son that he must look after. With baby in hand, Kiryu journeys to the seaside town of Onomichi, Hiroshima to unravel the truth about Haruka, her son, and a sinister secret that the Hiroshima yakuza are harboring.

From the unparalleled realism of the new setting of Onomichi, a beautiful, sleepy port town in Hiroshima Prefecture, to the latest evolution of Kamurocho, the biggest red-light district in Tokyo,Yakuza 6is the ultimate iteration the game's blend of gritty crime story, hyper-explosive combat, and all the vices and distractions those locales have to offer.

Yakuza 6: The Song of Life [After Hours Premium Edition] includes:

If you are familiar with Yakuza 6: The Song of Life [After Hours Premium Edition], why not let others know?

[This review is based on another version of this product]
F-14 D (52) on 23, Apr. 2019 23:36 (HKT)
Yakuza!
Comes with a hard cover art book, plus the game in a built-in disc-holder inside the hard cover book.
[This review is based on another version of this product]
neptunerune (25) on 23, Aug. 2018 15:51 (HKT)
One of the PS4's finest
I'm a newcomer to the Yakuza series and I can't stress enough how great it is. Yakuza 6 just nailed everything great about it. I'll forever consider it as one of PS4's finest. Oh and that Virtua Fighter 5: Final Showdown included as an extra in the game? Fantastic!
[This review is based on another version of this product]
victor.mak (17) on 04, Jul. 2018 11:15 (HKT)
The final episode of the series.
It's a must have for all the fans of Ryu Ga Gotoku series, which utilizes the "Ryu Ga" Engine for smoother game play and cut in cinematic graphics. Extremely beautiful scenes across the cities and music, ample of mini games to enjoy with especially the night club lines to unify the "night city" in Osaka. Battles are intensive especially for the final one. I'm super contented to have it in my library along with the Kiwami 1, 2 and the "Zero".
[This review is based on another version of this product]
gaotanzang (2) on 02, Jan. 2017 03:52 (HKT)
Final Chapter of Kiryu, Steppng Stone to the Future of Ryu ga Gotoku!
To all Ryu ga Gotoku Fans! This s the best game in the franchise, for both the story and gameplay! The fluidity of the combat and the fast paced movement, with the perfectly shaped story and tone of both Kamurocho and Onomichi, you can't go wrong with buying this game!

Worth every cent! Once you get it, thank SEGA, Nagoshi and Play-Asa!
[This review is based on another version of this product]
caossavona (5) on 30, Dec. 2016 17:34 (HKT)
Kazuma returns
another great game for Ryu ga Gotoku series
1 »