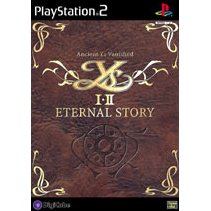 kyouki (2) on 10, Apr. 2004 23:09 (HKT)
Awesome remake
This is a great game. The gameplay is simple and unbelievably fast, the graphics are gorgeous, the music is wonderful, and it\'s just plain fun!
andytao (8) on 27, Aug. 2003 20:59 (HKT)
Ys I & II at its best!
Yup! YS I & II, the legendary RPG you kept on hearing over and over from veteran player, genuine 2d old school action! quality gameplay combined with the best ever soundtrack in video gaming history!
if you consider yourself a RPG fan, then theres absolute no reason to overlook this title!
if you had a hard time finding the turbo-duo or PC version, heres your chance! with the help of digicube, Falcom\'s legendary RPG is now ported over to the PS2! with enhanced graphics and extra goodies! BUY IT even if you don\'t know much japanese(though recommended that you do have a competent japanese level)!
it is THAT good!