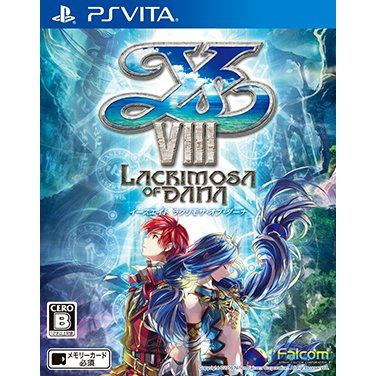 Works on all systems sold worldwide, a correct regional account may be required for online features.
1w Expected stock arrival within 1 week.
US$74.99
Our previous price:US$ 79.99
You save: US$ 5.00( 6% )
Manufacturer
Falcom
Rated By Our Customers
Compatible With PlayStation Vita (PS Vita)
Version

Works on all systems sold worldwide, a correct regional account may be required for online features.
1w Expected stock arrival within 1 week
Price
US$74.99
Our previous price:
US$ 79.99
You save:
US$ 5.00( 6% )
Play-Asia.com Return & Refund Policy
Click on a thumbnail to see more pictures for Ys VIII Lacrimosa of Dana

Ys returns with a brand new adventure for the first time in 8 years! Adol awakens shipwrecked and stranded on a cursed island. There, he and the other shipwrecked passengers he rescues form a village to challenge fearsome beasts and mysterious ruins on the isolated island. Amidst this, Adol begins to dream of a mysterious blue-haired maiden living in an unknown world. Join Adol as he unravels the riddle of the cursed isle and the blue-haired maiden Dana in Ys VIII: Lacrimosa of DANA!

If you are familiar with Ys VIII Lacrimosa of Dana, why not let others know?

vindal0012 (5) on 22, Nov. 2016 16:31 (HKT)
Fast paced action rpg game with great storyline
If you are familiar with Nihon Falcom games, this would be a great part of the collection. The gameplay is fast paced and the controls easy to grasp. The world in which the game takes place is an open world similar to mmorpg games. The world is well made with a lot of very interesting sceneries and each area is very consistent to the overall image of the world and full of details. A lot of sceneries and landscape in the game is very unique and creative. If you like adventure games, this is a good selection. And of course, you need to be able to read Japanese if you want to enjoy the game.
Hayato01 (503) on 05, Aug. 2016 02:40 (HKT)
Just shut up and buy it
For any Vita owners, this is a must have game. A great addition to the Ys series.
hana01shino (13) on 28, Jul. 2016 09:32 (HKT)
A MUST!
This is one the games that you will regret if you don't buy.Recommend it 5/5.
trunions (151) on 25, Jul. 2016 07:14 (HKT)
Awesome addition to the series.
This is a great addition to the Ys series. It expands on what already made the series great with the story, the graphics, and the gameplay.
JoshuaKadmon (8) on 23, Jul. 2016 21:32 (HKT)
Celceta 2.0 Plus
The opening minutes of Ys VIII can stand alongside some of the best sequences in the series' long history. It's immediately interesting and fresh, yet it remains satisfying to anyone that knows Ys well. Lacrimosa of Dana continues the gameplay design first found in Ys Seven and refined with Memories of Celceta, but this time it's even bigger, with initial focus placed on exploration and finding castaways to build an island village for those who survived a massive shipwreck. It gets much more involved as Adol uncovers secrets about the archipelago of islands, and the map quickly opens up to reveal an impressive variety of locales. Combat is fast and rewarding, gathering of resources has been streamlined, area map design is ingenious and includes more Metroidvania-esque ability-based progression than ever before, and menus are slick but offer a wealth of information and helpful tools. You can save anywhere, but there are also crystal checkpoints for continuing and later for fast travel. Ys VIII really shines on Vita, making smart use of touchscreen/pad features without it being obnoxious and just generally optimizing the presentation for a sublime handheld experience. I own every Ys game in existence, including imports and remakes, and Ys VIII may be my favorite yet. If you enjoyed Celceta, there's no way you can miss out on Lacrimosa of Dana.