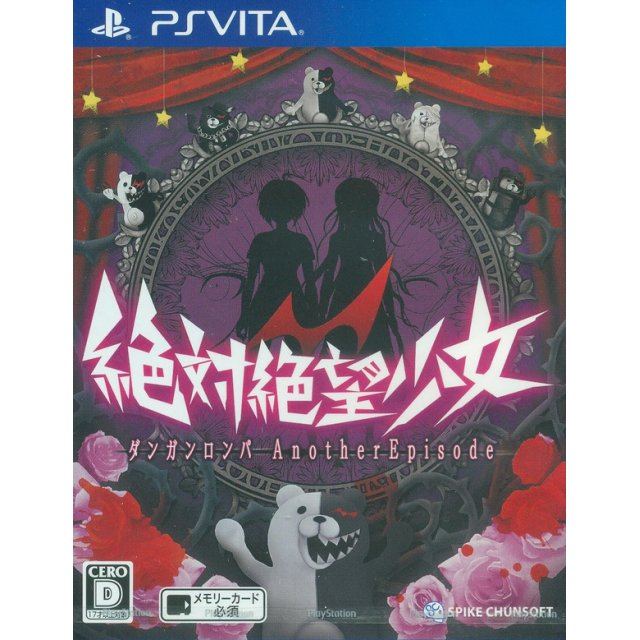 Works on all systems sold worldwide, a correct regional account may be required for online features.
24h In stock, usually ships within 24hrs.
US$46.99
Our previous price:US$ 69.99
You save: US$ 23.00( 33% )
Manufacturer
Spike Chunsoft
Compatible With PlayStation Vita (PS Vita)
Version

Works on all systems sold worldwide, a correct regional account may be required for online features.
24h In stock, usually ships within 24hrs
Price
US$46.99
Our previous price:
US$ 69.99
You save:
US$ 23.00( 33% )
Play-Asia.com Return & Refund Policy
Click on a thumbnail to see more pictures for Zettai Zetsubou Shoujo Danganronpa Another Episode

If you are familiar with Zettai Zetsubou Shoujo Danganronpa Another Episode, why not let others know?

DarkKnight (21) on 02, May. 2015 03:12 (HKT)
Game series
It has a good story but a bit weird to understand. I would recommend for the fan of Dangan Rompa who have played the previous versions before to start this if you want to understand, what's going on?
ilovejosun (1) on 16, Oct. 2014 09:40 (HKT)
Not as good as previous series
It's almost a very luxurious fan service for dangan ronpa fans. As dangan series fan I enjoyed it. Worth the money.
Great quality-2D/3D animation and you will see komaeda animated in 2D and hinata at the epilogue.
never try playing if you haven't played both dangan/super dangan ronpaj.

The new characters and stories weren't as good though. The main villains feels a little bit too much of cliche and their story doesn't seem to fit the big story.