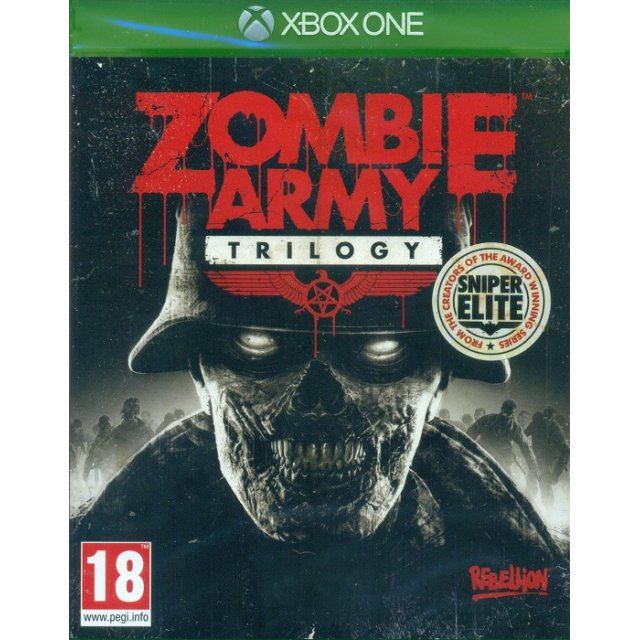 sold Out of print / Out of stock.
Manufacturer
Rebellion
Compatible With Xbox One™ (XONE™)
Version

Zombie Army Trilogy is a terrifying third-person shooter blending chaotic co-op gameplay set in an abominable alternate vision of World War II with ruthless horror and blood-pumping intensity. The game is a bundle of the re-cut and re-mastered editions of the best-selling Nazi Zombie Army 1 & 2 plus the previously unreleased Zombie Army 3.

In the midst of World War II as Berlin burns to the ground, and the infamous Adolf Hitler rises from his grave and unleashed his blasphemous trump card: an army of Undead Super Soldiers ready to spill blood and guts across Europe. Play as an elite sniper named Karl Fairburne or any of the eight playable heroes including four female characters and forge your battle against Hitler’s undead super soldiers! Armed with over 25 iconic weapons and powerful ammunitions, fight your way through 15 gruesome missions spanning 3 epic campaigns for up to 4 players! Take on unlimited and increasingly difficult waves of zombie snipers, fire demons, armored skeletons, and more before ultimately facing the demonic Führer himself - Hitler! To intensify combat, the franchise’s award winning x-ray kill-cam will be returning to give players the most graphic and gratifying illustration of a shot done right. Prepare for a war like no other in this terrifying franchise now made available in PlayStation 4, Xbox One, and PC all running bloodily beautiful in 1080p!

No reviews for Zombie Army Trilogy yet.