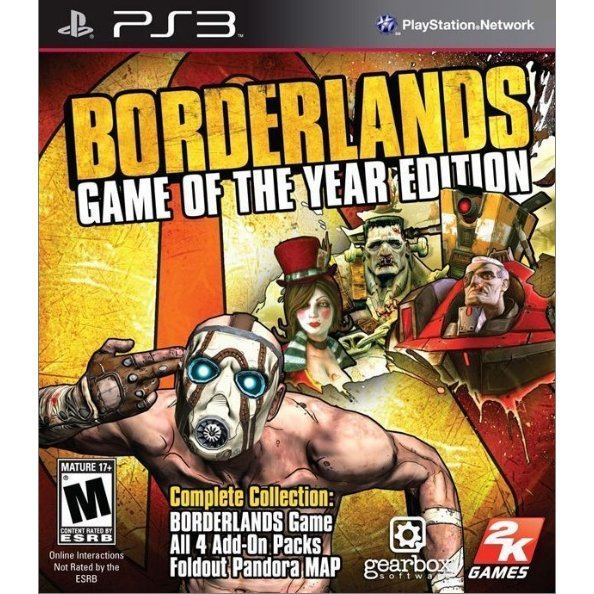 Works on all systems sold worldwide, a correct regional account may be required for online features.
1w Expected stock arrival within 1 week.
US$20.89
Our previous price:US$ 64.90
You save: US$ 44.01( 68% )
Manufacturer
2K Games
Rated By Our Customers
Compatible With PlayStation 3™ (PS3™)
Version

Works on all systems sold worldwide, a correct regional account may be required for online features.
1w Expected stock arrival within 1 week
Price
US$20.89
Our previous price:
US$ 64.90
You save:
US$ 44.01( 68% )
Play-Asia.com Return & Refund Policy
Trustpilot
Trustpilot

Borderlands is an original First Person Role Playing Shooter that combines the intuitive reward systems of action role playing games and the frantic-paced shooting combat of first person shooters. The game features a groundbreaking content generation system allowing for near-endless variety in weapons and item drops. Borderlands allows for 4 players to share the same game experience simultaneously online in co-o gameplay. Players can freely join or leave each other's games at anytime, or choose to play in the full single-player mode. These features, along with a rich and deep fiction that touches upon the mysteries buried beneath the surface of a danger-filled planet, combine to form a breakthrough experience that challenges the conventions of modern shooters.

If you are familiar with Borderlands: Game of the Year Edition, why not let others know?

F-14 D (52) on 31, Mar. 2014 12:51 (HKT)
Welcome to Pandora Vault Hunters
Borderlands is a very good FPS with role playing elements adding an interesting twist to the game making it feel fresh enough to distinguish it from the generic feel that most FPS have nowadays.

The story has an awesome co-op with off-line Split-Screen and online for up to 4 players. Co-op is a ton of fun and it is a total blast to explore Pandora with co-op buddies along for the ride.

The DLC content is on the disc, so for off-line users that is a big bonus in addition to the local split screen co-op.
[This review is based on another version of this product]
quake_ranger73 (143) on 29, Jan. 2014 02:20 (HKT)
Feel like Mad Mad
Do you like wastelands? Do you like customizing tons of your weapons collection? Do you want to feel like Mad Max? This is the game for you. Yeah, it's considered classic but the gameplay and multiplayer is awesome. The GOTY package includes the map of Pandora. Must haves game for X360
soulfire.rn (84) on 19, Jun. 2013 18:49 (HKT)
But It!!!!
Its borderlands!!! With all 4 dlc on disk!!! Need i say more? Buy it!!!
[This review is based on another version of this product]
foc83 (35) on 19, Aug. 2012 02:15 (HKT)
One of the best games out there!
There's no reason for not having played Borderlands yet, specially when you can get it together with all DLC so cheap!
[This review is based on another version of this product]
jonarc.ebay (96) on 21, Aug. 2011 14:41 (HKT)
Fun but shallow. (360 version)
Good shooting mechanics and a large gameworld to play in, but not a great deal going on. The game is basically a set of soulless fetch quests from various NPCs. The shooting is fun though and is good with friends (though not strangers for me). I also enjoyed the game in single player in smaller doses. The inclusion of codes for all DLC is nice in the GOTY edition and comes recommended for those who want a shooter than doesn't take itself too seriously which they can waste free time in.
1 »