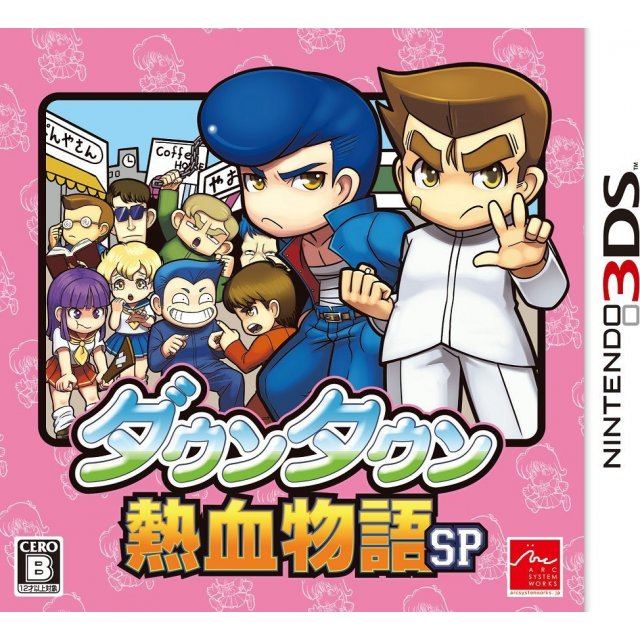 NTSC
1w Expected stock arrival within 1 week
Price
US$41.99
Our previous price:
US$ 49.99
You save:
US$ 8.00( 16% )
Play-Asia.com Return & Refund Policy
Click on a thumbnail to see more pictures for Downtown Nekketsu Monogatari SP

Developed by Arc System Works, it's safe to say that gamers can expect the same attention to detail on this remake as they've seen on the developer's other action and fighting titles; in Japan, Arc Systems has already been making other Kunio titles (All Star Special) so this remake is in good hands, especially if it's to celebrate the 30th Anniversary of this venerable series.

In Downtown Nekketsu Monogatari SP, the original Famicom/NES title has been lovingly recreated for today's expectations. Aside from the new details to sprites, updated graphics, and smoother animations exhibiting an additional level of complexity, a wealth of added extra features are now available; fans of the first title will find so much more than just nostalgia, and newcomers will be taken aback by how deep this beat 'em up actually is.

The biggest change are the combat differences. There are new techniques and combos, as well as unseen Special Moves. If these special moves are used over and over, they will evolve and become explosive Super Special Moves, perfect for when single handedly taking out an entire gang.

There's also the introduction of consecutive attacks which allow players to extend their combos to overpowering levels; the other new feature to combat are the Nekketsu counters, to be used when swarmed by enemies, essential for the tougher more aggressive gangs later in the game.

There's also changes to the traditional way of leveling up; before, players had to beat up thugs, take their cash, and then go to any of the many local stores for consumable items that would increase stats. This still remains and is now bolstered but he introduction of EXP which acts in the same way as consumable items. On top of this, players can also equip specific items - either bought or as enemy drops; each piece of equipment adds bonus skills for extra character depth and development.

Aside from the graphical updates, there's also new areas and event scenes; to take it even further,Downtown Nekketsu Monogatari SP even features Day/Night cycles, so expect to see events exclusive to certain times, pushing this title towards a more action rpg vibe.

Finally, there's a brand new VS mode called "Fighting of Double Dragon 2016" which is a 2D fighting game mode featuring all 14 characters including gang bosses, each with their own move set and super special moves. Speaking of playing together, the story mode can be co-op according to Arc System Works, and both modes can be accessed viadownload play or local ad hoc.

With all this new content in an already proven game, players who enjoy a fast paced beat em up with a level of complexity that has inspired almost every other beat em to come afterwards,Downtown Nekketsu Monogatari SPis the end all be all. The only thing missing now is for Arc System Works to localize it!

No reviews for Downtown Nekketsu Monogatari SP yet.