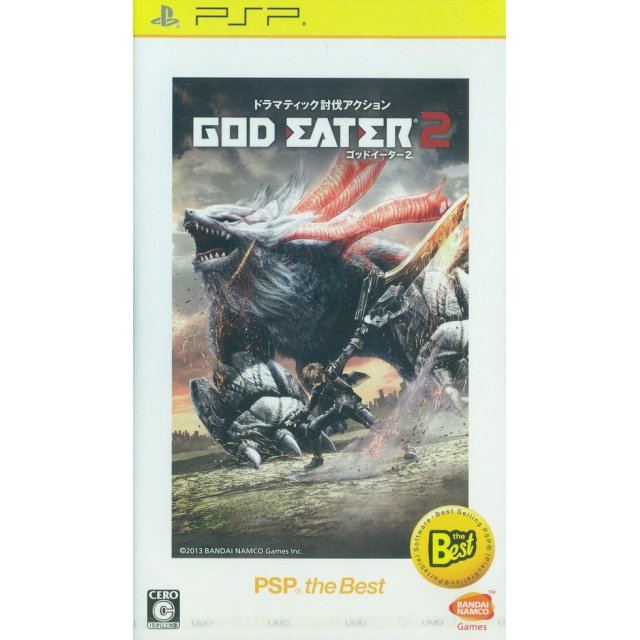 Works on all systems sold worldwide, a correct regional account may be required for online features.
1w Expected stock arrival within 1 week.
US$41.99
Our previous price:US$ 49.99
You save: US$ 8.00( 16% )
Manufacturer
Bandai Namco Games
Rated By Our Customers
1w Expected stock arrival within 1 week
Price
US$41.99
Our previous price:
US$ 49.99
You save:
US$ 8.00( 16% )
Play-Asia.com Return & Refund Policy
Click on a thumbnail to see more pictures for God Eater 2 (PSP the Best)

November 2013 marks the long-awaited release of God Eater 2, Namco Bandai's hi paced multiplayer coop beast slayer action adventure.In a post apocalyptic future, a new incurable pandemic has stricken the already decimated populous; it is up to the Fenrir, wielders of extraordinary God Eater weapons to investigate.Featuring a new protagonist, new monsters, new weapons and new gameplay elements that accentuate the already hectic gameplay of yore, players will be hard pressed in defeating their new foes. In addition is the introduction of the “Blood Art System” - a means to visually string together an array of attackes with additional status attributes for unreal battle evolution.In development for over 3 years, God Eater 2 aims to bring players an enthralling action experience with top notch control so that no beast can escape through lack of skill.

If you are familiar with God Eater 2 (PSP the Best), why not let others know?

[This review is based on another version of this product]
Xerpent (189) on 25, Jan. 2018 09:06 (HKT)
Greatest Vita game coming to PS4
Now I can enjoy this great game on PS4 quality. And they're giving plus bonus another God Eater Ressurection!
[This review is based on another version of this product]
demonos3 (1) on 23, Sep. 2016 06:40 (HKT)
Not Bad
Just my opinion, its neither the best nor the worst game I've played. If you enjoyed Monster Hunter, well it will feel like a watered down version of it, with more blood and less Monsters (Aragami). they love to spam you to death because your character wants to fly when they get hit by even the smallest attack, so be careful. its a slight graphical improvement on an already released game on an older platform so don't get your hopes up for the latest cutting edge graphical hoohah, the fingers will look like uncooked hotdogs. What am I talking about, you didn't read this for me to tell you a leaning on the fence review. Lets see, Comparisons- imagine Monster Hunter but with less weapons and the ability to jump or even double jump anywhere you want without an Insect Glaive or the new Ariel Attack skill they added. Smaller maps as in you get 1 area with no transition from 1 section to the next so no worries of bull rushing you back into another area aka no loading screen shenanigans. you can be revived on the spot. Instead of only being allowed 3 deaths (4 in Monster Hunter Generations with the addition of a food buff) you can die a total of 10 times if you were revived on the spot or 7 if your team wasted time in picking you up even more if its a survival mission making this game... super casual. just like any other game on PS4, you need PS+ in order to play online, but when you go online it could take a bit to find a party. drawback of the online mode is that, if you are new to the game... prepare to have spoilers thrown in your face if you join someone elses party because you join them at whatever point in the story they are at. a plus to that would be you can get some pretty good materials for upgrading your weapons later on in your story. you can not upgrade your weapons until you get to that point in the story (its a character episode, you won't miss it.... they throw it in your face). even after you gain the ability to upgrade your weapons and even if you have the materials for the upgrade (use google or whatever, you can find out what you need) you still can't do the upgrade until you get higher into the story, and no, they don't tell you when you're able to do it. you just have to keep checking to make sure. I suggest you turning off the radio when you select a mission... Fran and Hibari will talk your ears to death during the entire encounter. watch out for people who use Blasters/Lasers/Shotguns... they can hit you and throw you across the map. no damage... but the Aragami will side swipe you in that instance so it can get annoying. Your followers rarely listen to anything you say. I find the only command they listen to is the regular Split Up and Converge... trying to make them split attacks between separate Medium/Large Aragami is almost impossible... since they like to run to the other, attack it and then run to you drawing them in for a Mid Size ganking fest, add Kanon Daiba to the mix and well... you might as well throw the controller down. No, Nana's skill will not help you. For these reasons, I give this a 3... for Average.

P.S. small glitch, a number of people weren't able to get some of the day one costumes. you redeem a code found in your game case, you get an email in game telling you that you can buy or craft them... but they don't show up.
[This review is based on another version of this product]
fr4nz (32) on 08, Dec. 2014 20:27 (HKT)
good
Too bad I don't understand the story.
But it is by far the best "hunting action" game available on the PSVita.
Xinitii (2) on 02, Nov. 2014 08:40 (HKT)
Fantastic Series!
The original God Eater Burst that was released in the US was in my top 5 most favorite games ever. I was really sad when 2 didn't see an international release. I recommend this game for any Monster Hunter fans or anyone who likes a nice story. Don't buy this version, wait for the expansion God Eater 2: Rage Burst. 9/10
[This review is based on another version of this product]
yamato_freedom (8) on 24, Aug. 2014 17:36 (HKT)
Best
I was excited to play this game since it was released on PSVita. I knew and played the first one and it was my favourite on PSP.

Now that I have the game I think it's the best one on the "hunting action" genre (like "Monster Hunter", "Soul Sacrifice" or "Freedom Wars") because it has cool characters, good music and pretty good gameplay.