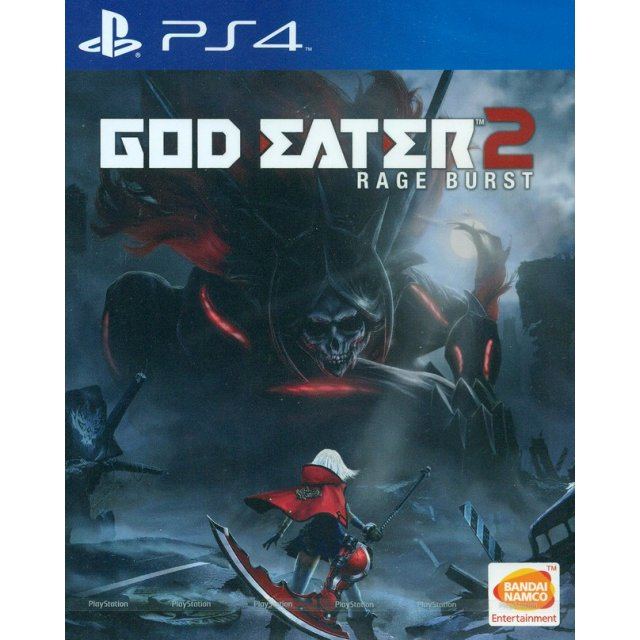 Works on all systems sold worldwide, a correct regional account may be required for online features.
24h In stock, usually ships within 24hrs. (Only 1 left in stock.)
US$19.99
Limited time offer - Secure yours now before the offer expires!

Manufacturer
Bandai Namco Games
Rated By Our Customers
24h In stock, usually ships within 24hrs
(Only 1 left in stock.)
Price
US$19.99
Our previous price:
US$ 57.99
You save:
US$ 38.00( 66% )
Play-Asia.com Return & Refund Policy
Trustpilot
Trustpilot
Click on a thumbnail to see more pictures for God Eater 2: Rage Burst (English)

God Eater 2being upgraded for the PS4 and PSV means technical improvements will be added to improve immersionlike high definition visuals, 5.1 sorround sound, and support for the DualShock4 speakers. Of course it doesn't end there, as Bandai Namco have put out a press release detailing some of the finer changes to gameplay and story!

The new story content inGod Eater 2: Rage Bursttakes place within the 'Spiral Tree' - host to a bunch of different area types.The members of 'Blood' aretasked with reclaiming these areas one by one as they make their way up to the top levels. The Outer Edges are bathed in soft sunlight, which contracts with the Bottom Level which seems to be almost diseased. As your climb higher the layers become less natural, with the Middle Layer being a place of desolation.

As far as stats goEndurance is pretty importantbecause as characters are downed and have to be respawned, they’ll be taken out of battle completely if their Endurance drops too low. If you let the Endurance of the player-character drop too low then it is game over!

Brand new forRage Burstare 'Camping Scenes' that take place betweenfights where players can prepare for future battles, as well as catchglimpses of the cast doing various activitiesas they take a break. Despite the resting implications of the Camping Scenes players will not be able to replenish items.

Along with new missions comes the Personal Abilities gameplay system, a new way for players to have more control over the NPC allies! Players can spend their Ability Points, earned on missions, on unlocking these new Personal Abilities which consist of new skills or buffs to existing attributes.

Please note: A Singapore PlayStation Network (PSN) account is required to redeem/download any downloadable content (DLC) of this game

If you are familiar with God Eater 2: Rage Burst (English), why not let others know?

[This review is based on another version of this product]
Xerpent (189) on 25, Jan. 2018 09:06 (HKT)
Greatest Vita game coming to PS4
Now I can enjoy this great game on PS4 quality. And they're giving plus bonus another God Eater Ressurection!
demonos3 (1) on 23, Sep. 2016 06:40 (HKT)
Not Bad
Just my opinion, its neither the best nor the worst game I've played. If you enjoyed Monster Hunter, well it will feel like a watered down version of it, with more blood and less Monsters (Aragami). they love to spam you to death because your character wants to fly when they get hit by even the smallest attack, so be careful. its a slight graphical improvement on an already released game on an older platform so don't get your hopes up for the latest cutting edge graphical hoohah, the fingers will look like uncooked hotdogs. What am I talking about, you didn't read this for me to tell you a leaning on the fence review. Lets see, Comparisons- imagine Monster Hunter but with less weapons and the ability to jump or even double jump anywhere you want without an Insect Glaive or the new Ariel Attack skill they added. Smaller maps as in you get 1 area with no transition from 1 section to the next so no worries of bull rushing you back into another area aka no loading screen shenanigans. you can be revived on the spot. Instead of only being allowed 3 deaths (4 in Monster Hunter Generations with the addition of a food buff) you can die a total of 10 times if you were revived on the spot or 7 if your team wasted time in picking you up even more if its a survival mission making this game... super casual. just like any other game on PS4, you need PS+ in order to play online, but when you go online it could take a bit to find a party. drawback of the online mode is that, if you are new to the game... prepare to have spoilers thrown in your face if you join someone elses party because you join them at whatever point in the story they are at. a plus to that would be you can get some pretty good materials for upgrading your weapons later on in your story. you can not upgrade your weapons until you get to that point in the story (its a character episode, you won't miss it.... they throw it in your face). even after you gain the ability to upgrade your weapons and even if you have the materials for the upgrade (use google or whatever, you can find out what you need) you still can't do the upgrade until you get higher into the story, and no, they don't tell you when you're able to do it. you just have to keep checking to make sure. I suggest you turning off the radio when you select a mission... Fran and Hibari will talk your ears to death during the entire encounter. watch out for people who use Blasters/Lasers/Shotguns... they can hit you and throw you across the map. no damage... but the Aragami will side swipe you in that instance so it can get annoying. Your followers rarely listen to anything you say. I find the only command they listen to is the regular Split Up and Converge... trying to make them split attacks between separate Medium/Large Aragami is almost impossible... since they like to run to the other, attack it and then run to you drawing them in for a Mid Size ganking fest, add Kanon Daiba to the mix and well... you might as well throw the controller down. No, Nana's skill will not help you. For these reasons, I give this a 3... for Average.

P.S. small glitch, a number of people weren't able to get some of the day one costumes. you redeem a code found in your game case, you get an email in game telling you that you can buy or craft them... but they don't show up.
[This review is based on another version of this product]
fr4nz (32) on 08, Dec. 2014 20:27 (HKT)
good
Too bad I don't understand the story.
But it is by far the best "hunting action" game available on the PSVita.
[This review is based on another version of this product]
Xinitii (2) on 02, Nov. 2014 08:40 (HKT)
Fantastic Series!
The original God Eater Burst that was released in the US was in my top 5 most favorite games ever. I was really sad when 2 didn't see an international release. I recommend this game for any Monster Hunter fans or anyone who likes a nice story. Don't buy this version, wait for the expansion God Eater 2: Rage Burst. 9/10
[This review is based on another version of this product]
yamato_freedom (8) on 24, Aug. 2014 17:36 (HKT)
Best
I was excited to play this game since it was released on PSVita. I knew and played the first one and it was my favourite on PSP.

Now that I have the game I think it's the best one on the "hunting action" genre (like "Monster Hunter", "Soul Sacrifice" or "Freedom Wars") because it has cool characters, good music and pretty good gameplay.