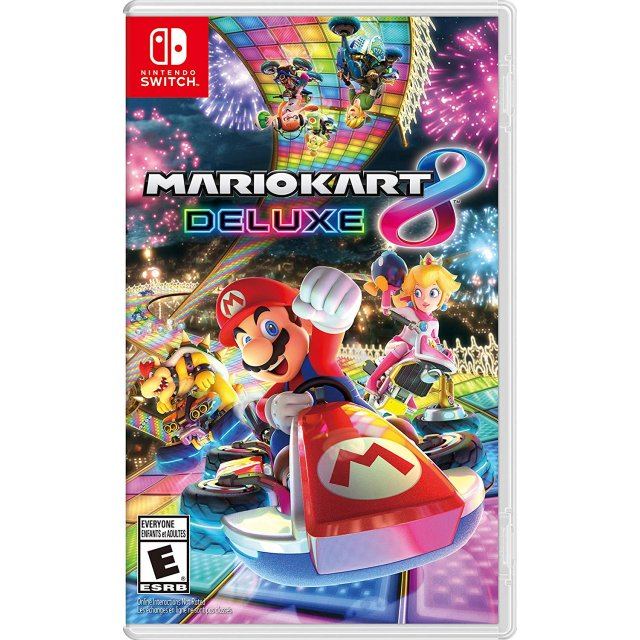 Works on all systems sold worldwide, a correct regional account may be required for online features.
1w Expected stock arrival within 1 week.
US$56.99
Our previous price:US$ 59.99
You save: US$ 3.00( 5% )
Manufacturer
Nintendo
Rated By Our Customers
1w Expected stock arrival within 1 week
Price
US$56.99
Our previous price:
US$ 59.99
You save:
US$ 3.00( 5% )
Play-Asia.com Return & Refund Policy
Click on a thumbnail to see more pictures for Mario Kart 8 Deluxe

rhadnard (38) on 25, Jul. 2017 23:23 (HKT)
Love and hate realationship
The mario kart franchise is know to be one of the games that you love playing it and you may feel very angry at some points, only one that has played it can say.
The game is amazing there's no flaws, and this version on nintendo switch brings new minigames, where you dont need to run to win but use some strategy.
There's not much i can say other than, get it and play it with friends and family, you can also play online with friends or find unknown people that can turn into new friends.
pamza_luikham (27) on 01, Jul. 2017 15:47 (HKT)
Mario Kart is the best
Who doesn't like Mario Kart and this game is the best iteration of the game
rsoondur (56) on 22, Jun. 2017 23:25 (HKT)
Nice Racing Game.
Nice and lovely racing game to own for Nintendo Switch fans.
gera001 (72) on 29, May. 2017 00:44 (HKT)
Buen juego.
Muy divertido, se disfruta más con los amigos. Recomendable.
athzem (105) on 25, May. 2017 13:46 (HKT)
play again and feeling awesome...
I have already owned MK8 for my WiiU and played it since then. Now, I bought the Switch version and found out that the feeling is still fresh. Nothing can beat the feeling of playing such kind of game on handheld device...
1 »