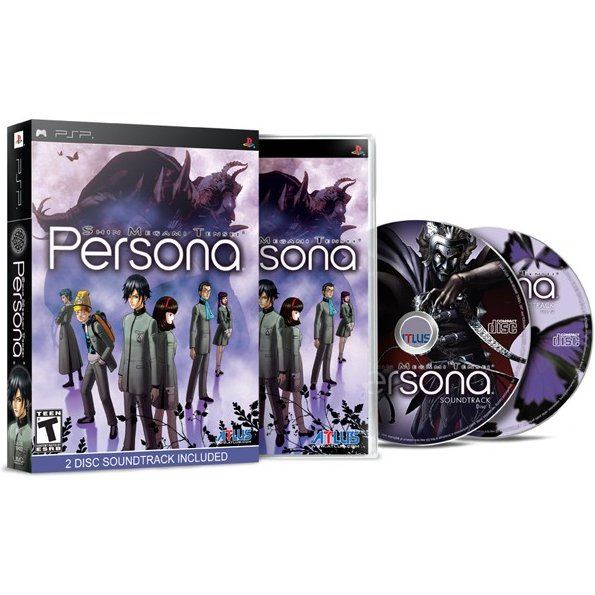 sold Out of print / Out of stock.
Manufacturer
Atlus
Rated By Our Customers
Compatible With Sony PSP™ (PSP™)
Version

One of the most critically-acclaimed roleplaying franchises of all time, Shin Megami Tensei has recently arose to prominence in North America with the releases of Persona 3 and 4, two of the highest-rated releases in their respective years. Now, Atlus revisits the first chapter in the Persona saga on PSP® (PlayStation®Portable) system. Completely rebalanced and remade, SMT: Persona allows younger fans of the series to find out what everyone’s been talking about for years, and gives long-time SMT supporters a wholly different take on an all-time classic.

Each and every launch copy of SMT: Persona will include the game’s full soundtrack—on 2 CDs—bundled with the game in a premium boxed set. This definitive version of the game will be impossible to resist for series fans! Only as long as supplies last!

If you are familiar with Persona (w/ Bonus Full 2-Disc Soundtrack), why not let others know?

poomwood (139) on 05, Aug. 2011 20:28 (HKT)
I just love atlus usa
How they produce great game from good game, and adding bonus ost. Unique experience with great av!
Hendy (10) on 01, Aug. 2011 15:27 (HKT)
PERFECT Remake
Persona is one of my most favorite RPG game series. This remake is PERFECT in any way: Re-arranged soundtrack, more simple interface and battle system, new choice to choose difficulties, all characters re-obtained their ORIGINAL name (from the Japanese version), as well as the Snow Queen quest which was not contained before in the US release for the PSOne version.

For all Persona and RPG fans, you shouldn't miss this game! Remember, this game come with Original Soundtrack CDs!!!
sushi_b (58) on 07, Jun. 2011 21:11 (HKT)
Persona for the PSP? Please.
Persona has always been a bit of an outsider series. It has a fairly large catalogue of titles to choose from. I've always personally been confused by it with spin offs like Digital Devil Saga and Shin Megami Tensei. I still would recommend this as it's the first game in the series and finding a copy of Persona for the Playstation is more difficult to get a hold of (in English)
phooart (271) on 02, Apr. 2011 12:53 (HKT)
This time it's Persona!
Japanese high school students, demons, cool graphics, cool story.

What more could you ask for? This is a must get for PSP!
TAS (112) on 21, Feb. 2011 15:25 (HKT)
Lovely.
This PSP port of the Playstation 1 RPG is a boon to all of us PAL gamers who were shafted on it's original release.
Having played (more like struggled) through earlier Shin Megami titles on the Super Famicom and the like, and delighted in the later installments like Persona's 3 & 4, it's a treat finally getting to the chance to play the first Persona installment.
Yeah, it's a 15 or so year old RPG and in part's it definitely shows. But I for one am not bothered. Great game!
And the complete 2-disc soundtrack is terrific!
1 »