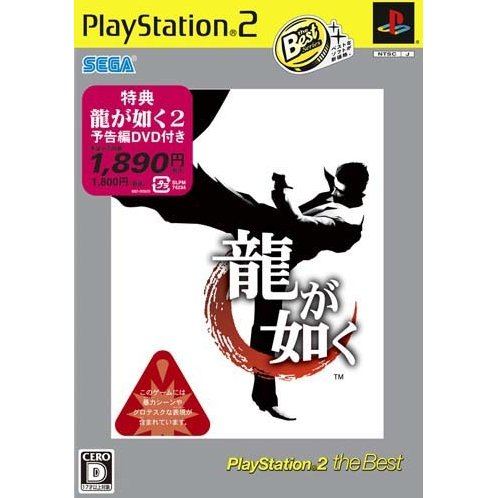 Collections
Sega
Rated
By Our Customers
Compatible with PlayStation 2™ (PS2™)
For JPN/Asian systems only.

In a society where respect and honor holds great importance, there is an even higher regard for these traits within the one organization that is most feared by all: the Yakuza. Kiryu Kazuma - a former rising star in the Yakuza who is rebuilding his life after serving a 10-year prison term for murder - suddenly finds himself caught in a spiraling underworld plot involving a mysterious girl known as Haruka and a missing ¥ 100 billion ($100 million). Kazuma must use his fists and his wits to stay alive as he unravels the complex web of truth and lies that surrounds the notorious Yakuza.For the first time, enter the Yakuza world in a thrilling adventure created by noted producer Toshihiro Nagoshi with novelist Seishu Hase. A critical and commercial hit in Japan, Ryu ga Gotoku authentically re-creates the city streets and illicit haunts of Tokyo's nightlife district, with memorable characters, cinematic style, free-roaming adventure, a gripping story, beautiful but deadly fighting, and deep gameplay.お求めやすいベスト版で登場！「龍が如く2」予告編DVDが付属！かつて「堂島の龍」と呼ばれた伝説の男“桐生一馬”。そして、消えた100億円の鍵を握る少女“遥”。欲望と暴力の渦巻く巨大な歓楽街“神室町”を舞台に、愛・人情・裏切り、そして謎解きなど、様々な人間ドラマが織り成されます。練り上げられたストーリーとリアルな世界。ゲームの持つ新たな可能性を提示した大人のための最高のエンターテインメント、それが『龍が如く』です。

If you are familiar with Ryu ga Gotoku (PlayStation2 the Best), why not let others know?