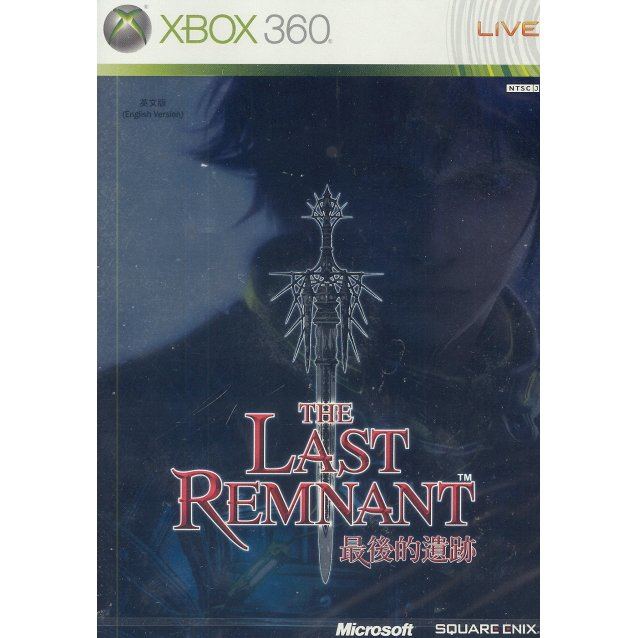 sold Out of print / Out of stock.
Manufacturer
Square Enix
Rated By Our Customers
Compatible With Xbox360™ (X360)
Version

The first role-playing game (RPG) in a new series brought to you by Square Enix, THE LAST REMNANT signifies a new era for a next-generation world.

In ancient times, mysterious artifacts referred to as Remnants were discovered all over the world. People used these objects for their awesome powers—a choice that eventually began to cause a rift in the world’s balance. Equality was replaced by those who ruled and those who were ruled over. War was inevitable. A thousand years later is when this story begins …

If you are familiar with The Last Remnant (English language Version), why not let others know?

[This review is based on another version of this product]
lucifer_o_lucy (8) on 14, Mar. 2018 15:23 (HKT)
Aww David, that's mint!
Great game, an evolution to RPG mechanics that is not afraid of experimenting. For true RPG players.

It has some problems loading too much, yet a killer soundtrack compensate.
[This review is based on another version of this product]
awe.of.she.1 (173) on 30, May. 2016 20:10 (HKT)
Flawed but fun!
Despite some of the problems, give it a try. It's actually a pretty unique game, and worthwhile.
[This review is based on another version of this product]
kkentb (165) on 07, Mar. 2011 11:06 (HKT)
3good
Good game goodprice good service
[This review is based on another version of this product]
PuNiao (365) on 28, Jan. 2009 16:03 (HKT)
The Last Remnant
Microsoft continues its expansion into the Japanese RPG genre with Square Enix's The Last Remnant. Xbox fans can finally sink their teeth into a game from the legendary company behind the Final Fantasy series. The turn-based battle system is more complex than most RPG games, with nuances in choice of attacks and battle positions that affect gameplay and battle results. Yet, the developers have still managed to engage and not annoy the gamer with the extra details. Still, the end product is a mixed bag as the game suffers from one major issue - poor frame rate. This causes jerky video cut-scenes and image display problems that mar the enjoyment of the beautiful graphics. Still, longtime RPG fans would not be disappointed with the game as it introduces challenging elements to the familiar formula of one boy's journey to greatness.