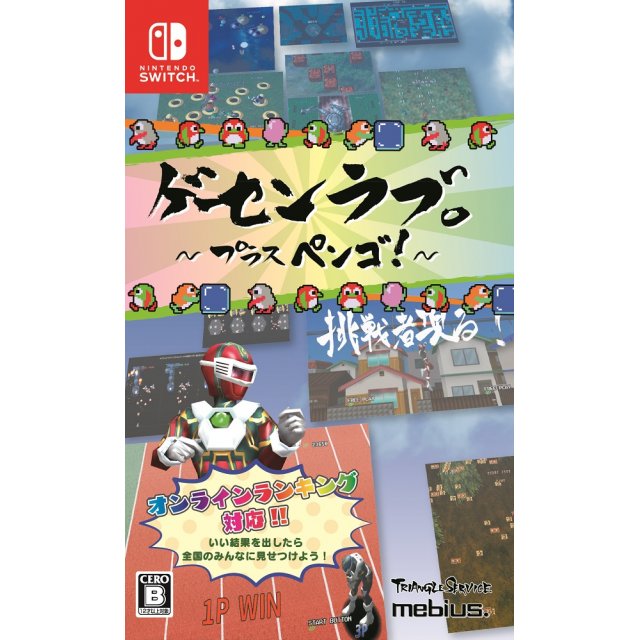 Works on all systems sold worldwide, a correct regional account may be required for online features.
24h In stock, usually ships within 24hrs.
US$46.99
Our previous price:US$ 54.99
You save: US$ 8.00( 15% )
Triangle Service
Compatible With Nintendo™ Switch (SW)
Version

Works on all systems sold worldwide, a correct regional account may be required for online features.
24h In stock, usually ships within 24hrs
Price
US$46.99
Our previous price:
US$ 54.99
You save:
US$ 8.00( 15% )
Play-Asia.com Return & Refund Policy
Click on a thumbnail to see more pictures for Arcade Love: Plus Pengo!

The Arcade Love: Plus Pengo! is a collection of four games, including the two minigames that test your skills via Action-Game Skill Test and Shmup Skill Test. Along with a shmup called CombatZeal and Pengo.

Action-Game Skill Test
Just beat enemies one after another, control joystick fast to run fast, play Whack-A-Mole, or play ding dong ditch. Action-Game Skill Test is an action game including such mini games with humor, and measures your action-game skills as a gamer age.

It is an action-game edition of one of our arcade games, Shmups Skill Test, which was released in 2007 and well-reputed.

Shmups Skill Test
Shmups Skill Test was originally included in an arcade game Shooting Love. 2007 and attracted a wide range of game players. The first-ever, exciting feature was that you can measure gamers age. While preserving the original feature, Shmups Skill Test is now upgraded to play up to four players, even on horizontal screen.

To measure your gameplaying skill as gamers age, you play various mini games, such as: just defeat enemies one after another; just dodge enemy bullets and put shoot empty cans into the trash.

CombatZeal
The first-ever, local multi-player shooting game on multi windows! CombatZeal is a shoot’em up game that focuses on score attack on the divided screen into the same number as the players’. The stages vary in play style; a stage for undemanding score attack, a stage where all the enemies in your screen will disappear if you cannot shoot out the enemies faster than other players, and a stage you can obstruct the other players by powering up.

You can casually experience game-playing, which you enjoyed in game comics before while not playing before. Thus CombatZeal is a combat shmups like never before.

Pengo
An enhanced version of the action puzzle game released by Sega for arcades. Players progress while crushing enemies with ice blocks. In addition to the one-player arcade mode, single matches and team matches (two players per team) that support up to eight players at once are also available.

The Ninja Saviors: Return of the Warriors (Multi-Language)
US$ 29.99

No reviews for Arcade Love: Plus Pengo! yet.