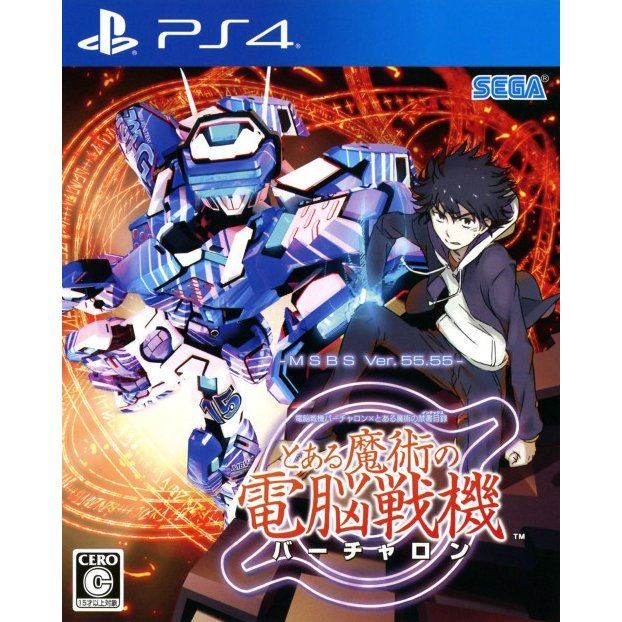 Works on all systems sold worldwide, a correct regional account may be required for online features.
1w Expected stock arrival within 1 week.
US$35.99
Lunar New Year Sale
Limited time offer - Secure yours now before the offer expires!
Our previous price:US$ 72.99
You save: US$ 37.00( 51% )
Manufacturer
Sega
Rated By Our Customers
Compatible With PlayStation 4™ (PS4™)
Version

Works on all systems sold worldwide, a correct regional account may be required for online features.
1w Expected stock arrival within 1 week
Price
US$35.99
Lunar New Year SaleLimited time offer - Secure yours now before the offer expires!
Our previous price:
US$ 72.99
You save:
US$ 37.00( 51% )
Play-Asia.com Return & Refund Policy
Trustpilot
Trustpilot
Click on a thumbnail to see more pictures for Cyber Troopers: Virtual On x Toaru Majutsu no Index: Toaru Majutsu no Dennou Senki

Get in the Virtualoid cockpit, take your weapon, and prepare for an ultra-violent-post-modern battle, because YES, Virtual-On has returned! InToaru Majutsu no Virtual-On, a new generation of 50-foot mechas are ready to battle hard, but this time they’ll be equipped with magical powers. We’re not joking, indeed this new chapter is a crossover game with the light novel series “Toaru Majutsu no Index” published by Dengeki Bunko.

Use the combat systems strategically to reduce your challengers into a molten mass of twisted metal, more you’ll win and more money you’ll earn to develop and improve your machine’s parts and abilities to pilot the deadliest war machine into the heart of intense battles.

[This review is based on another version of this product]
xxdeadpeacexx2000 (13) on 19, Dec. 2019 13:45 (HKT)
Come and try this Panzer High
Ultimately, Girls und Panzer: Dream Tank Match isnt the perfect primer for Girls und Panzer, nor could anyone expect it to dethrone contemporaryporary tank sims, but taken on its own merits, it's a solidly-built, roundly enjoyable foray into the fun-loving world of Girls und Panzer, delivering a ton of fan service and some engaging combat on top.
[This review is based on another version of this product]
thomassteven40 (2) on 09, Nov. 2019 06:10 (HKT)
Awesome Port
Never got to play this on the PS2 back in the day so had to import it due to being a physical switch collector. Game is awesome. Kind of like Samurais and Sword play meet the original Resident Evil game as far as the controls. Graphics are good as it is a PS2 port. Plays in English and actually started up in English when I put it in my switch. Highly Recommend!
[This review is based on another version of this product]
Lunari (6) on 30, Oct. 2019 10:39 (HKT)
A Great Re-release
This updated release of Onimusha is really fun. The controls are modern, and it makes the game much more fast paced and fun.
[This review is based on another version of this product]
middletonbriana94 (1) on 16, Oct. 2019 22:50 (HKT)
Back Again
Despite not being able to read most the menu option its pretty straight forward to learn what each menu does. The characters are evenly balanced; including the recently added free dlc characters, Wild Blast character have a super mode that has a once per round super attack and Death Blast characters sacrifice health in exchange for power and a super attack. Most character are unlocked quite easily in mission mode; only one in arcade mode, and is an improvement from Battle legends grindy unlocks.
I recommend this game for anyone, its fun by yourself and fun with friends and family.
[This review is based on another version of this product]
hobblegott1138 (2) on 13, Oct. 2019 14:27 (HKT)
A game so nice I bought it twice!
Been playing on PS4 digital download from my Singapore account and I'm enjoying it so much I ordered a physical copy for Vita, meow! Definitely holds its own with the likes of Senran Kagura and Onechanbara, meow! I'm actually playing it right meow!
Just got my Vita copy in the mail today, meow! It came with a promo code for an extra outfit and underwear set, meow, and it added it seamlessly to the PS4 version as well, meow! That was so very nice of mew to include, meow! The controls manual insert was really nice to see, too, moew!
1 »