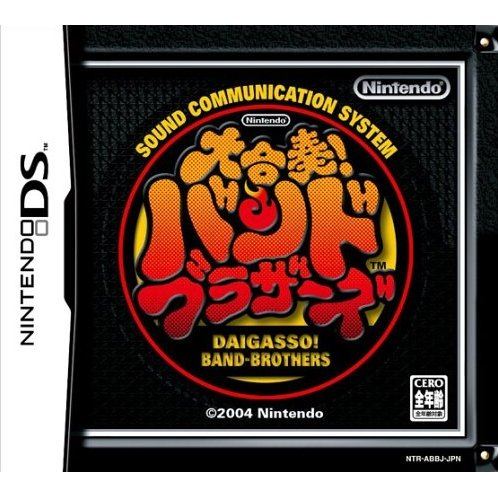 Works on all systems sold worldwide, a correct regional account may be required for online features.
24h In stock, usually ships within 24hrs. (Only 1 left in stock.)
US$49.99
Limited time offer - Secure yours now before the offer expires!

Manufacturer
Nintendo
Rated By Our Customers
24h In stock, usually ships within 24hrs
(Only 1 left in stock.)
Price
US$49.99
Play-Asia.com Return & Refund Policy

Click on a thumbnail to see more pictures for Daigasso! Band Brothers

Daigasso! Band Brothers gives you the chance to rock out on your Nintendo DS™.To make sweet music, all you have to do is grab the stylus, choose your favorite instrument and a song and cue the scrolling dots on the touch screen with perfect timing.If your solo career isn't flying, you can always join a band. An unlimited number of people can link up for a massive jam session, as long as all players are in wireless range and have their own game cards.Plus, up to eight people can jam together over a wireless connection with just one game card. If you aren't in the mood to play one of the included songs, you can create original compositions just by humming into the microphone.

If you are familiar with Daigasso! Band Brothers, why not let others know?

rafael.schm.up (75) on 28, Jun. 2012 01:57 (HKT)
Great Rythm Game
A great game that was not released on the west. Don't let the japanese language intimidate you, this one demands little to no knoledge of the language.
username (20) on 24, Mar. 2010 08:08 (HKT)
Fun Game
Unlike most music games, like ddr or guitar hero, Daigasso! Band Brothers gives you 1 on 1 control of the music synthesizer. Thus, with the the built-in ability to create your music, you can literally play any song in the world on Band Brothers.
Also, the game is very easy to play without any knowledge in Japanese.
bumticket (3) on 06, Aug. 2008 09:24 (HKT)
simple and classic
great game. being an expert gamer, i still admit to it getting a little difficult. the songs are great but the presentation alone keeps it from getting five stars. buy it. addicting.
Toraneko (4) on 26, Apr. 2007 23:37 (HKT)
Awesome rhythm game
A great pick-up-and-go game, I started playing it on the bus as soon as it arrived. You can play many variants of a song by playing the different instruments, and there is also an interesting \'survival mode\' you can test your skills with.

However, the midi quality of the songs is a bit of a turnoff... though the gameplay largely makes up for it. And don\'t forgot 8 player wireless!
Mikey on 28, Feb. 2007 23:44 (HKT)
BEST GAME EVER!! I\'m so hooked!
This game is one of the reasons I bought a DS Lite. It\'s true it may not have the best visuals like the Bemani games, but what it lacks in that department makes up for the overall gameplay. (It also helps that it has some of my favorite J-pop songs in the game) Also, for all you instrument players, if you have a favorite piece of sheet music, you can input songs in the editor and then play them as you would any of the featured songs in the game. BUY it! It\'s worth it.
1 »