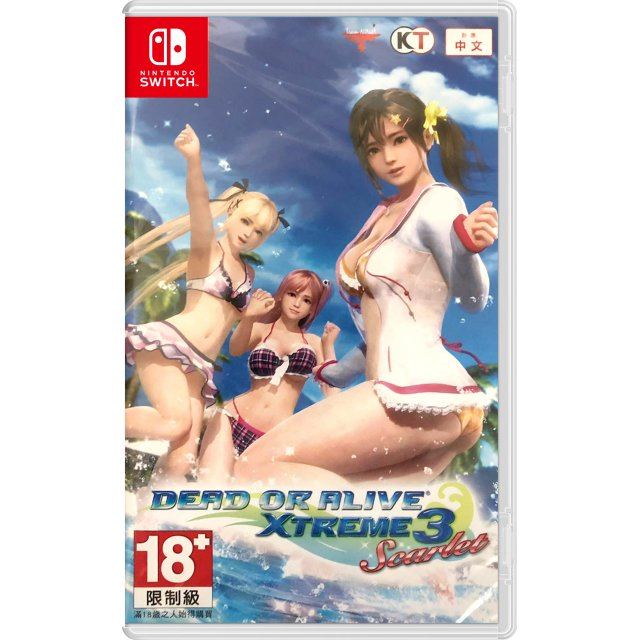 Works on all systems sold worldwide, a correct regional account may be required for online features.
24h In stock, usually ships within 24hrs.
US$64.99
Our previous price:US$ 69.99
You save: US$ 5.00( 7% )
Manufacturer
Koei Tecmo Games
Rated By Our Customers
24h In stock, usually ships within 24hrs
Price
US$64.99
Our previous price:
US$ 69.99
You save:
US$ 5.00( 7% )
Play-Asia.com Return & Refund Policy
Trustpilot
Trustpilot
Click on a thumbnail to see more pictures for Dead or Alive Xtreme 3: Scarlet (Multi-Language)

[This review is based on another version of this product]
kristofdockx (1) on 25, Jan. 2020 23:46 (HKT)
No title
I just find it awesome we can still buy these games through the internet which otherwise would be unavailable for us western gamers. The game itself is exactly like the first doax which i still have on first xbox, so it's infinitely playable if you don't bore easely and like casual gaming experience. The 40euro customs fee i take for granted for a game unaccesible for me otherwise.
[This review is based on another version of this product]
xxdeadpeacexx2000 (13) on 19, Dec. 2019 13:44 (HKT)
Great game
There’s fun to be had on New Zack Island, although we wish it drilled down on two or three things rather than the assortment of slighter activities it offers. Ultimately, Dead or Alive Xtreme 3: Scarlet is a minigame compilation that you play repeatedly to earn money to buy costumes for busty supermodels. Opportunities to photograph them in ever more leery ways unlock as you go, and that’ll have to be enough to satisfy you for the long term because the games themselves pall after a few hours. Like most beach holidays, they’re fantastic in theory, but once you’re there and twiddling your thumbs for things to do, it can get a bit dull.
nikhazy.akos (1) on 25, Oct. 2019 13:32 (HKT)
Its a fun game from a forgotten era
It is what it is. They know people will import this, so it has English in it.

If you don't have a Dead Or Alive: Xtreme 3 game yet, you can't really go wrong with getting this one. But if you already have a version, probably stick with it.
1 »