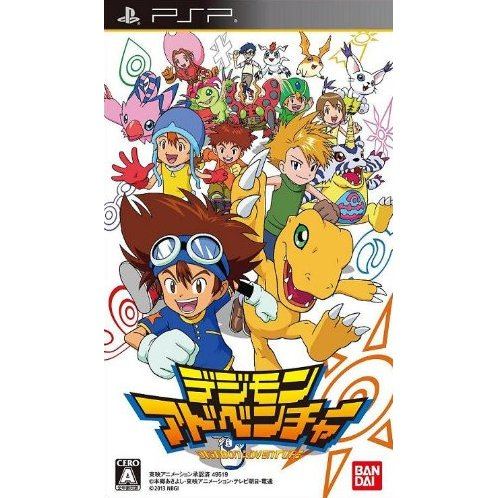 Works on all systems sold worldwide, a correct regional account may be required for online features.
24h In stock, usually ships within 24hrs.
US$52.99
Limited time offer - Secure yours now before the offer expires!

Works on all systems sold worldwide, a correct regional account may be required for online features.
24h In stock, usually ships within 24hrs
Price
US$52.99
Play-Asia.com Return & Refund Policy

Click on a thumbnail to see more pictures for Digimon Adventure

When the Digimon Adventures came out in 1999, it inspires everyone to become Digimon players with its touching story and powerful digimons. Now, you can jump into the anime and experience the battles first hand. The PSP game includes all the episodes in the series as well as the movie version. Use Digi Pieces and Skill Panels to release the full potential of your Digimon. The Digimons can evolve into complete new monsters. But don't focus everything on your Digimon. Create strong bonds with other characters as well. By choosing the different dialogues during story events, you can lead your adventure to new episodes and events. After you finish your adventure, all the heroes gather in the 15th anniversary event. All these boys are going to chase after a mysterious Digimon. Come and find out what he is

If you are familiar with Digimon Adventure, why not let others know?

Raising the eight Digimon... Agumon, Gabumon, Biyomon, Tentomon, Palmon, Gomamon, Patamon and Gatomon... felt like your taking part of a classic adventure from the 54 episodes of the anime itself.

The Digivolve sequence in the game itself sure brings back memories, although it has some odd quirks like Gatomon's Digivolution to Angewomon... but, that's understandable due to PSP's limitations.

It's a great Digimon game and anyone who is a fan and has a PSP should get it, despite it being in Japanese...
fourgods (6) on 03, May. 2013 10:47 (HKT)
Digimon
Awesome game!!! Most of the scenes are a lot like the anime. If your a fan then you should give the game a go. Nice that all the digimon have mega forms. Awesome bonus dungeon with leaders from the other seasons. Only problem I had was that if a digimon was not present during an episode, and you level up the other party members, when the part member returns they would be behind in level. Good example of this is Patamon. After he comes back, he is like 10 levels (or more, depending on how you much you've trained) behind the other digimon in your party >
mardukkurios (8) on 06, Apr. 2013 04:36 (HKT)
The best Digimon Game of all time
Finally I got my Game and I can actually can only say very good things about it.

With so many Digimon Games in the past, this Installment was the one I was most exited of, since it's based of the Series I enjoyed and loved. You play from episode to episode with some "side missions" which add some small depth in variety, but all in all this Game follows the first Season. I also took the time to rewatch the series before playing it, this is kind of a small Guidebook. ;)

The battle System is pretty easy and not hard if you know the basics what you can do. The battle Mechanics are a simple combined Version of Grandia and FFX where you can knock out your enemy to get another attacking chance. Later on you will get your Digimon to evolve on higher Levels, everything you do (Digivolve or even Skills) require SP, so you need to look after them if you fight tougher enemies that they don't run out that fast. The Save Point does not only save the Game, you will be fully restored to fight at full power.

Also, this game grants my childhood wish I never believed to get... WARP DIGITATIONS FOR ALL!

Only thing which is sad, that you can't replay Episodes once done. Let's see what the future brings.

If Namco Bandai keeps that road and would bring out similar Games to Digimon 02, Digimon Tamers, Frontier and so on would absolutely my biggest Dream!

I can recommend it to Digimon Fans! ;)
terracannon876 (12) on 10, Feb. 2013 08:22 (HKT)
No title
Great for those nostalgic for the first season. The graphics are fairly average, although even with that, it manages to make the Digimon look very alive. The music is a callback to the OST of the first season (I haven't checked if they actually ARE the pieces from the first season) and so is all the voice acting (with the exception of Takeru and some of the supporting characters).

The game itself flows like an abridged version of the series, which can feel a bit uneven especially in a game for an anime that excelled in random conversations and interaction between characters.

The game is also extremely simple. The battle is turn-based, and the dungeons are hardly extensive. There are enough areas to keep things fresh, though. I'm frankly amazed at how balanced the entire battle system is given that you can evolve the Digimon whenever you want (to Adult, at least. I'm not sure about Perfect and above...).

My main complaint about the battles would be that there is a dire lack of enemy variety.

Otherwise, the game is a fun excursion. It's hardly anything hardcore, even with the customization you can do with the DigiPieces, but the battles and dungeon/exploration are simple.
wingyen88 (1) on 24, Jan. 2013 15:07 (HKT)
good and best digimon ever
this games best ever on psp for good memory and good gameplay to play it