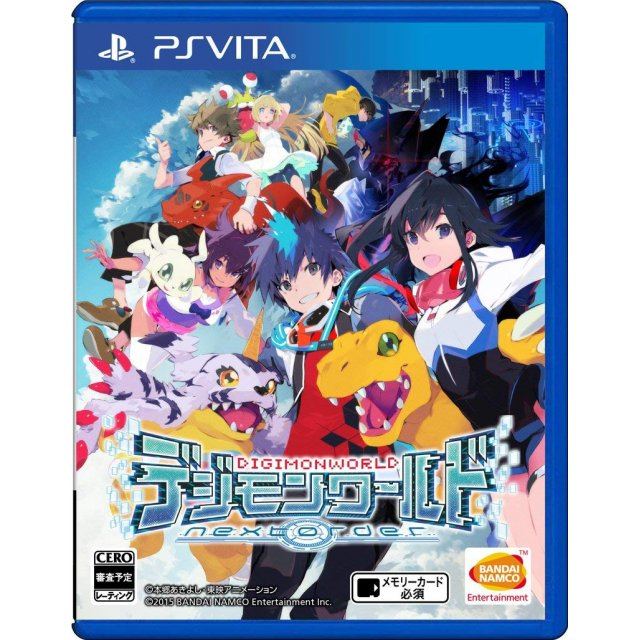 Works on all systems sold worldwide, a correct regional account may be required for online features.
24h In stock, usually ships within 24hrs.
US$16.99
Our previous price:US$ 55.99
You save: US$ 39.00( 70% )
Manufacturer
Bandai Namco Games
Rated By Our Customers
Compatible With PlayStation Vita (PS Vita)
Version

Works on all systems sold worldwide, a correct regional account may be required for online features.
24h In stock, usually ships within 24hrs
Price
US$16.99
Our previous price:
US$ 55.99
You save:
US$ 39.00( 70% )
Play-Asia.com Return & Refund Policy
Trustpilot
Trustpilot
Click on a thumbnail to see more pictures for Digimon World: Next Order

If you are familiar with Digimon World: Next Order, why not let others know?

[This review is based on another version of this product]
aykutsgn (4) on 05, Sep. 2018 21:29 (HKT)
The definitive Digimon experience!
This is the definitive Digimon experience. The ExE mechanic, which allows your two Digimon to DNA Digivolve into a better Digimon, is probably the best mechanic in the Digimon games. A must-have for all Digimon fans!
[This review is based on another version of this product]
bisjut (5) on 28, Feb. 2018 16:26 (HKT)
Not as great as World 1 but it is good.
This one is the ported version from the vita. Graphic is quite meh, but the main thing you should know is the gameplay. Instead of training one digimon, you can now train 2 digimons at once. The world is expansive but feels disconnected from each section. Story is forgettable. However you'll find yourself wanting for more as you train your digimon from fresh to mega/ultimate. Any fans of digimon should get this, it is a no brainer.

If you happens never had a digimon games before this and only play pokemon, you'll need to know one thing. In digimon world, your digimon will die of old age. You cannot keep a digimon for too long. But with each passing digimon generation, the digimon will grow stronger as some of the stats will carry to the new egg. So don't get too attached to your pikachu and try to explore new training regiment to get new digimons.
Zack00 (9) on 22, Aug. 2017 22:14 (HKT)
Grab while still you can!
I don't think that they will make english sub on PsVita so i just grab this in JP version, since i did finish Digimon world Re:Digitize in JP version 5day after it came out, & end it with my 3rd Digimon a Lilithmon which make people go crazy asking for my save data = ='' , well this is a great game to have just like Digimon world on ps1 and Digimon world Re:Digitize on psp, well i did play Digimon world for 5day straight no sleep back on old days just to annihilated my big bro&his fren Digimon in Arena lol..
[This review is based on another version of this product]
TNinja (30) on 05, Apr. 2017 21:39 (HKT)
Quite the Adventure
It looks like a throwback of the first Digimon World game. You get similar Digimons opening similar shops in your little town.
But now you have two Digimons to take care of.