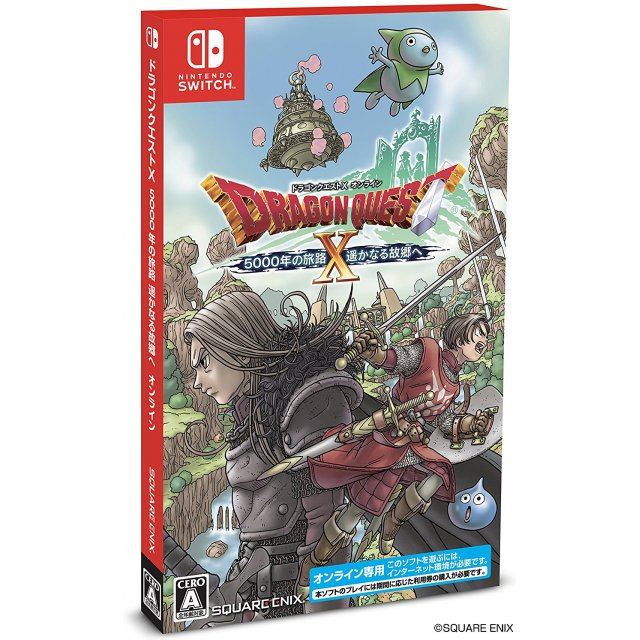 Works on all systems sold worldwide, a correct regional account may be required for online features.
24h In stock, usually ships within 24hrs. (Only 2 left in stock.)
US$35.99
Limited time offer - Secure yours now before the offer expires!

Works on all systems sold worldwide, a correct regional account may be required for online features.
24h In stock, usually ships within 24hrs
(Only 2 left in stock.)
Price
US$35.99
Our previous price:
US$ 39.99
You save:
US$ 4.00( 10% )
Play-Asia.com Return & Refund Policy
Trustpilot
Trustpilot

A fourth major additional expansion for Dragon Quest game.
​
With relations between Astolia and Nagaland restored, peace was finally returning...however, the Hero is taken through time by a small blue and green creature who warns him about a Bad Future where an unspeakable evil has won. He shows the Hero that the future where a cocoon is hanging in the sky, and they travel in time to stop that evil from gaining its full power. Unfortunately, a new commander of the Dragon Quest X monster army and some Hemographic beasts try to make it a reality...

If you are familiar with Dragon Quest X: 5000 Year Journey to a Faraway Hometown, why not let others know?

[This review is based on another version of this product]
matt986 (132) on 04, Mar. 2016 12:32 (HKT)
Generous additions
Plenty to see and do, a fairly decent addition to the DQX world. Obviously if you have no knowledge on how to play the game, don't buy this, it'd just be a coaster for you.

I doubt this will be the last expanded content addition to the game. If it gets released on the NX or PS4, they'll clearly do more.
[This review is based on another version of this product]
matt986 (132) on 29, Sep. 2015 23:20 (HKT)
Worthwhile
As a fan of this series, and someone who likes this online game, I thought it was worthwhile.

Anyway, for those who aren't sure. Absolutely do your research before buying this game before deciding to buy. Play-Asia have plenty of great Dragon Quest games, so if you decide you don't have the knowledge to get online with it, I suggest checking out the vast amount of DQ titles on here.
[This review is based on another version of this product]
Cranberry (32) on 03, Jun. 2015 12:36 (HKT)
A Mediocre Expansion
This is another expansion to Dragon Quest X, and so far it is not as impressive as Version 2 was. There are some new areas and features, but given the price, it doesn't seem like you're getting your bang for your buck. Once again, no offline mode update makes this one a bit disappointing.

Hopefully some future updates will increase the value. Only pick this up if you are pretty hardcore into the game. There's just not enough content to justify the price right now.

Worth checking out if you know what you're doing.
[This review is based on another version of this product]
Cranberry (32) on 23, Dec. 2013 09:54 (HKT)
Expanson to a great game
This is an expansion disk for Dragon Quest X. To play, you must have Version 1 of Dragon Quest X. Do not buy this if you don't have version 1 already! This is not a stand-alone game!

If you are offline only, this has nothing for you. There is no additional content to the offline mode. This benefits online players only.

This expansion grants you access to the human continent. It's a huge place, so there is a lot to explore. But at a cost that is nearly equal to a full fledged game, this expansion is rather pricy and might be hard to justify the price tag. Additionally, you can't access the new continent until you've beaten Episode 1, which will likely take you a month or more to do. If you are already an active Dragon Quest X player, this is probably worth your while if you're into the game and want to see more. If you're unsure about DQX, or just getting started with the game, you don't need to feel compelled to grab this right away.

Also note that the server still IP blocks all connections from outside of Japan. If you don't live in Japan, it's very hard to play this, especially on the Wii. If you're going to import and play through a VPN, consider the PC version instead. The setup is a lot easier.
1 »