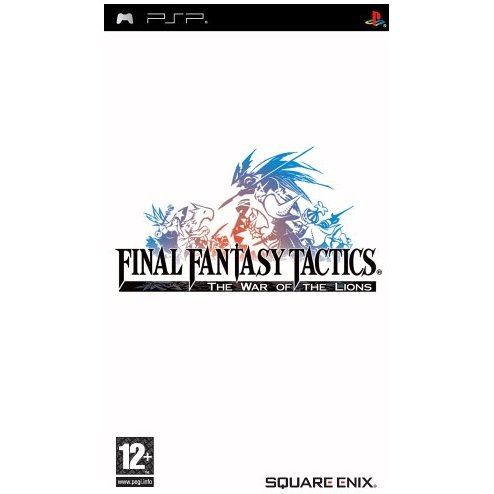 sold Out of print / Out of stock.
Manufacturer
Square Enix
Compatible With Sony PSP™ (PSP™)
Version


Click on a thumbnail to see more pictures for Final Fantasy Tactics: The War of the Lions

From the creative minds behind Final Fantasy XII comes an epic combat adventure set in the hugely successful Final Fantasy universe. Imaginative artistic design sets a beautiful backdrop for a gritty, politically charged tale, in which two young men endeavor to reshape the course of history. When the Lions clash, the land of Ivalice trembles. Have you the strength to wrest a kingdom from the clutches of war or will this dark act of Ivalice's history be her last?

If you are familiar with Final Fantasy Tactics: The War of the Lions, why not let others know?

[This review is based on another version of this product]
PuNiao (365) on 23, May. 2007 15:17 (HKT)
Final Fantasy Tactics: Shishi Sensou
Square-Enix, developes of the Final Fantasy series, have been on a roll, remaking their older titles for the past two years. Its latest addition is Final Fantasy Tactics: The Lion War, a remake for the PlayStation Portable. Players of the original will find that The Lion War comes full of extras. Two new Job classes - The Dark Knight and the Onion Knight - are available, as are two additional unique characters. Balthier from Final Fantasy XII and Russo from the upcoming Final Fantasy Tactics Advance 2 are characters who can join your party. There is also an ad hoc wireless mode. You play as Ramza Beoluve, a former noble who has grown disillusioned with the war between the countries of Goltana and Larg. While fighting as a mercenary, however, he uncovers a far more sinister plot surrounding the 12 Zodiac stones and an attempt to take over the world of Ivalice and sets off the uncover the truth and stop disaster.

Strategy players will feel right at home in the turn-based battle system. Battles use the Charge system, with both enemies and allies taking their turns according to a Charger gauge. When it reaches 100, the unit can move, attack and so forth. This opens upthe secondary charge system, in which players can choose to attack immedately, or charge more powerful spells that will be used after a short pause. If enemies or allies move out of the field of effect before that occurs, the spell still goes off, but its effects could be wasted or even hurt your own units. Battles are heavily varied, with 22 Jobs to obtain and master. Characters gain two types of levels, Job and Character levels. The only issue with the game is its incessant lag.

Moving the camera or using spells and skills result in a noticeable freeze between when the action is carried out and its subsequent effect. The longer the animation lasts, the bigger the time lapse between its animation and sound. While a certain amount of loading is to be expected in many PSP titles, the amount of lag here borders on the absurd.
[This review is based on another version of this product]
asermely (1) on 18, May. 2007 01:32 (HKT)
Too Slow
This game is great, great story great game mechanics. But I found the slow down for spells to be unbearable at times. It\'s not enough to ruin the game, but enough to get you aggrivated SEVERAL times.
[This review is based on another version of this product]
silinosdraconis (2) on 17, May. 2007 10:33 (HKT)
Great game!
This is a great port from the PS1 version of the game, about the only flaw getting into it so far is using the Magic and some of the abilities it tends to slow down on the PSP a slight bit, but not enough to make you mad, still a must get for anyone that loved the old FFT game!