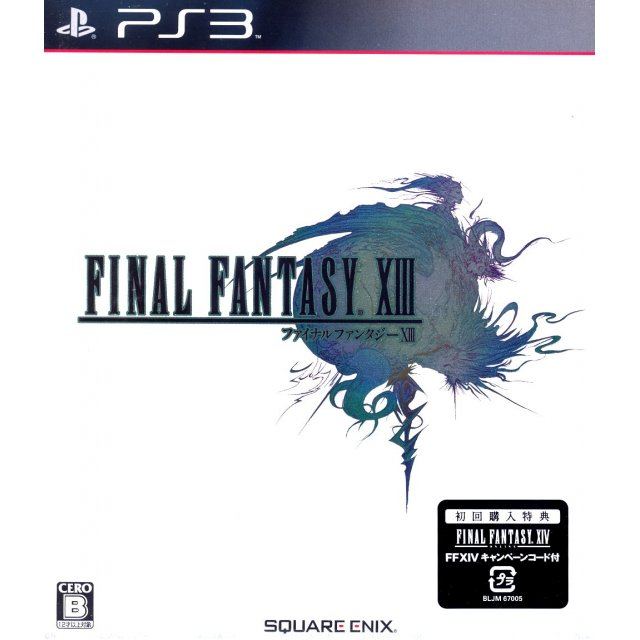 Campaign Code for FF14
If you will be playing FF14 Online next year (2010) then might as well pick this Japanese version (the one with the logo only on the cover). It contains a campaign code that gives you a "secret item" in-game when you play FF14.

A tale of souls from a futuristic civilization illuminated by the Light of the CrystalThis eagerly anticipated title takes full advantage of the PlayStation 3 system's advanced hardware, providing tangible, intuitive controls while delivering seamless transitions between real-time gameplay and stunning in-game cinematics. The latest in cutting-edge technology has been utilized in development of FINAL FANTASY XIII, thus making this newest addition to the FINAL FANTASY series worthy of the title "next generation."

The plot, musics, graphics and the gameplay are... Waoh !!!
JD (1) on 11, Jun. 2011 21:29 (HKT)
My perfect game...but lacking a few tools...
Likes: There was almost nothing to complain about. The game runs well, menus are crisp, and the battles are amazing (although sometimes unnecessarily tough). To address the main complaint on linearity, i feel it was a nice choice to keep the game fast paced and story driven. I play JRPGs for just that reason.

Dislikes: I have only one complaint about the game. It does feel like you are dragging the characters to the end. While the linearity I think is good for the story, it makes it feel like one long marathon to the end. The story is not as enthralling as i would have hoped (being an anime fan put my standards higher i suppose), and it does not need the linearity to focus this game.

Pet peeves but nothing to write home about: Long...long...uhhmmm...long battles. After battle ratings really lowered my morale sometimes. Don't need those. Also the lack of menus. I like to be able to see an in depth look at my inventory like weapons, and a stat page with maybe a picture or two would not have killed them.

All in all a good game and one someone like myself would enjoy, but my rating only received the fourth star because of the in game mechanics like the crystarium, simple stat and weapon system, and the fact that they brought back a revamped ATB system.
videogameexpert (13) on 17, Nov. 2010 03:02 (HKT)
Final Fantasy in the new Era
Its been a long time since the last numbered Final Fantasy game, and after 12's slight disappointment by fans, Square Enix had a lot to make up for. And they did, with interest. Graphics nothing short of beautiful, and while the music doesn't live up to Nobuo Uematsu it is in itself recognisabe and likable. The characters and story sure live up to the Final Fantasy name. The gameplay though, I am sorry to say, is a system that needs work. They took a shot and for the time being it was interesting and creative but not worthy for a Final Fantasy game. Most battles were easily one by simply clicking auto attack, no real strategy required. But as with all Final Fantasy you should also play for the story, not just gameplay, and this one is fantastic!
sakurada_kaoru22 (7) on 04, Nov. 2010 11:27 (HKT)
Not perfect, but very fun
It's not perfect game, but hating it because it isn't Final Fantasy V or VI would be unfair.

The voice acting is superb, with such people as Maaya Sakamoto in the voice cast.

The controls are done well, and actual gameplay is fun.