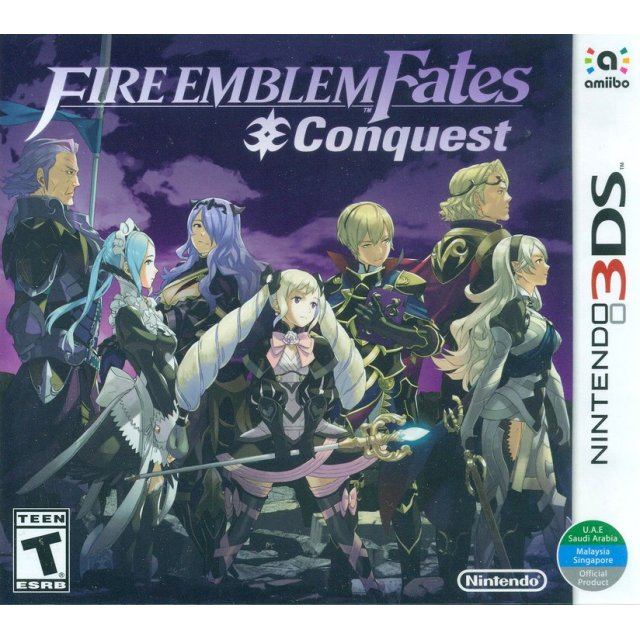 sold Out of print / Out of stock.
Manufacturer
Nintendo
Rated By Our Customers
Compatible With Nintendo 3DS™ (3DS)
Version


Click on a thumbnail to see more pictures for Fire Emblem Fates: Conquest

If you are familiar with Fire Emblem Fates: Conquest, why not let others know?

Eldariooon (89) on 15, Jan. 2018 02:53 (HKT)
Developed by the same team that created Fire Emblem Awakening, the new adventure adds challenges never before seen in the series.
Two kingdoms at war ; the peace-loving Hoshido and the glory-seeking Nohr. It is up to the player to decide which side to fight for with amazing visuals, an entirely captivating story and engrossing game play. Neither veterans nor newcomers should miss a change for one of the best offerings for the 3DS.
gera001 (72) on 04, Apr. 2017 06:07 (HKT)
Buen juego
La historia y la música son buenas. Si te gustan los RPG pasaras grandes horas de diversión.
[This review is based on another version of this product]
Raymustang (4) on 18, Feb. 2017 11:46 (HKT)
Pedestrian at best
Mechanically there's nothing wrong with this game, but the story is painfully flat and the game's attempts to sell you it's 2 other paths makes it feel like a used car salesman has started dressing in Fire Emblem's clothing. Wait for a discount if like me you're a fire Emblem maniac.
[This review is based on another version of this product]
rongman (13) on 12, Jun. 2016 05:43 (HKT)
Great followup to Fire Emblem Awakenings
If you liked Fire Emblem: Awakenings, you'll most likely like this game. I feel that the story is a bit weaker, but the gameplay is better and combat is much improved. As a Fire Emblem fan or a strategy rpg fan in general, you can't go wrong with this game.
flarehedgehog (19) on 18, Mar. 2016 11:14 (HKT)
Worth It
Ignore the poor localisation of the story, gameplay is what matters here and its brilliant! This is levels above Awakening in terms of strategy and difficulty. Also waifus, which is always a plus. easily 9/10
1 »