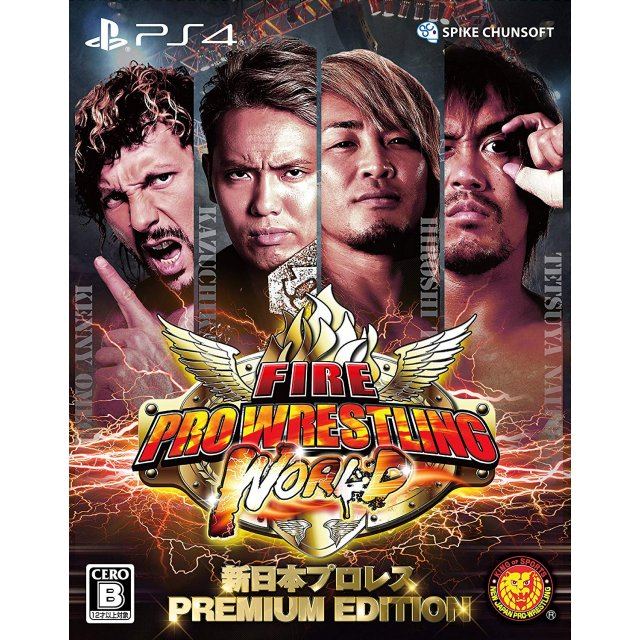 sold Out of print / Out of stock.
Please take note that, once purchased, this item must be paid immediately and cannot be cancelled or returned.
Manufacturer
Spike Chunsoft
Compatible With PlayStation 4™ (PS4™)
Version

The Champion returns to the ring. The greatest grappling game returns to take on the world! Customize every aspect of the match, from your wrestler to the ring itself, in your fight for the championship belt.

If you are familiar with Fire Pro Wrestling World Premium Edition [Limited Edition], why not let others know?

The Fire Pro Wrestling series found its beginning back in 1989, the brainchild of Japanese programmer Masato Masuda who had already made waves in the video game industry programming the critical and commercial success 'Pro Wrestling' on the Nintendo Entertainment System. A much beloved title for oldschool gamers and wrestling fans alike.

When Fire Pro Wrestling made its debut on the market, no one would have any idea of the significance the series would have over an entire genre of games and yet remain completely niche and almost unknown to all but the most dedicated western audiences.
In truth, Fire Pro Wrestling is the father of modern wrestling games, innovating and refining many of the features we see in the games today.

To fully grasp the impact the Fire Pro Wrestling series has had over the wrestling game genre, we have to look at how two completely different cultures view Professional Wrestling in its entirety. While Pro Wrestling in the West has relied heavily on pageantry and characters to get over; Japanese wrestling is viewed as a legitimate sport, covered by the press and sports media. The ring drama does not unfold over a microphone or through awkward skits, but rather in-ring storytelling and match psychology.

This is where the fundamental difference between Western and Japanese developers have differed over the years in the wrestling game content they produce.
Western wrestling games have always relied heavily upon licenses and a particular brand to sell units. It never really mattered if the games were actually any good. Button mashing an opponents lifebar into oblivion while manipulating the cardboard cut out likeness of a real superstar has been the bread and butter staple of western wrestling games for decades. We loved it, and we continued to buy each installment of each licensed game, but ultimately were left with shallow gameplay and a complete lack of in-ring drama from developers who either didn't care or didn't understand pro wrestling, and some would argue, still don't.

Then along came the Fire Pro series. Through its early installments it began to build upon certain gameplay fundamentals. Unlicensed and unbranded, the series crammed the rosters with the likenesses of real wrestler and real promotions and focused solely on developing gameplay as the foundation the series would build upon through each installment.

Gameplay and customization is unequivocally the flame that has sustained the Fire Pro series from 1989 to 2018.
Giving players the tools not to beat a lifebar out of an opponent and slap on a guaranteed pinfall, but to actually tell their own stories with their own characters through their own preferred style of grappling.

The Fire Pro series was the first series to personalize its rosters with their own statistical parameters, utilize a customizable logic system and incorporate what we now consider basic features in a wrestling game such as stamina, fatigue and limb damage. Now Spike-Chunsoft have given the fans a new toybox to create in, and plan to throw in plenty of additional features as time progresses. With additional logo and ring editors entire promotions will rise and fall within the community and thousands of real and fictional wrestlers, grapplers and even MMA fighters will thrive and compete.

One of the staples of the Fire Pro series has been its minimalist presentation. The 2d graphics, simple introductions and focus on in ring action over amateur theatrics; while not necessarily appealing to the younger gamers of today, still remain colorful and beautifully hand animated. Many long time fans of the series also believe the 2d base allows for far more creative freedom in the editing process as well.

And creative freedom is what Fire Pro is all about. Molding your own unique vision, limited only by your imagination and not the lame narrative of some stooge writer. Fire Pro has a soul and is developed as a labor of love for fans, by fans, and is not just the annual mediocre churnout of a corporate brand.

The series isn't for everyone, but does boast an insanely hardcore following that even includes some of the wrestlers whose Fire Pro counterparts have appeared throughout the storied series. Some people are perfectly content with the offerings of the licensed brands; but those who love the Fire Pro series love it a lot and we owe a huge debt of gratitude to Tomoyuki Matsumoto and all the developers at Spike-Chunsoft who have made this labor of love a reality at long last. With a PS4 console release and a Steam release, it is safe to say many of us will be running across each other on both platforms.