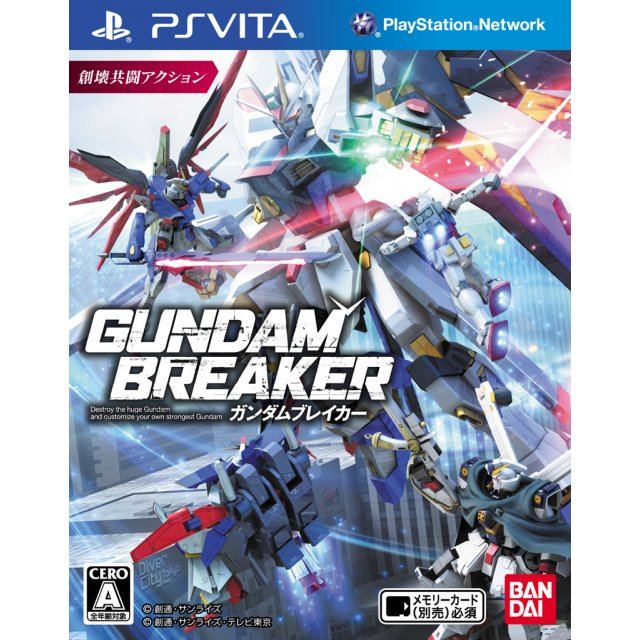 Gundam Breaker lets players customize their own Gundam models and then pilot them in battles against other models of all different sizes in real world locations. The title could easily be described as a Dynasty Warriors-style hack and slash with tons of customizable options. As you battle other models, you can gain their parts and become stronger yourself - which means you can fight your favorite enemies from the Gundam anime and take their power!Since both PS3 and Vita use the same online world you can have the same game experience on the platform of your choice.

Conception II Shichisei no Michibiki to Mazuru no Akumu
US$ 24.99

If you are familiar with Gundam Breaker, why not let others know?

Imation (457) on 20, May. 2017 07:58 (HKT)
good game
this game can be totally japanese, but check carefully the text on all the menus... present texts un english!!!
randante (20) on 07, Apr. 2014 08:43 (HKT)
It's a LEGO Gundam!! with ADHOC system implemented!
I will say exactly the same as in my PS3 reviews, with a few exceptions: AMAZING games! BETTER than other Lego games! Various combinations (i.e. Zaku Head + RX-0 Chest + ZZ legs + Freedom Backpacks) are DOABLE! It's a PERFECT games for every gundam and lego fans! VITA Version is superior due to its ADHOC MULTIPLAYER MODE! Other than that, it's exactly the same game as the PS3 Ver. with a little bit downgrade in its graphics dept.
drunkirby18 (7) on 02, Mar. 2014 08:53 (HKT)
No title
Gundam breaker is a master piece. It's a shame this will never come to the USA. I recommend this import to anyone who is a fan of great games.
ultimasupersaiyan (9) on 30, Jan. 2014 12:06 (HKT)
So much fun!
I can't speak a word or read Japanese but the game is so well made that it doesn't matter. Fun hack 'n' slash gameplay as well as great online co op. Lots of fun and better online!
odeblu (1) on 21, Jan. 2014 19:13 (HKT)
Parts, EVERYWHERE!
This game allows you to use your imagination to Build the best Mobile Suit Around and play it in single player missions and online play. The game its self requires a good grinding in order to get really good parts, but it is fun to do it with so much customization. look for translations on gamefaqs if you are not used to japanese, it'll help a lot.
1 »