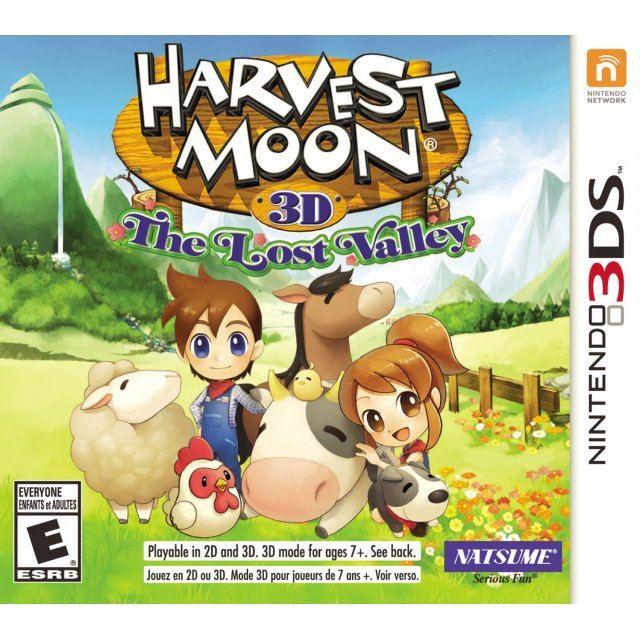 Natsume
Rated
By Our Customers
Compatible with Nintendo 3DS™ (3DS)
For US/Canada systems.

Hiking your way through the mountains one day, you're caught in an unexpected snowstorm and barely find shelter with the help of a faint voice. When you awaken, you find and help a kindly Harvest Sprite buried under the snow, who tells you all of the seasons in the valley have vanished except for winter. To return all 4 seasons to the valley, you'll need the help of the villagers, the Harvest Sprites, the Harvest Goddess, and even the King of the Underworld! You've never played a Harvest Moon game quite like this!

If you are familiar with Harvest Moon 3D: The Lost Valley, why not let others know?

Eldariooon (90) on 20, Mar. 2018 21:29 (HKT)
Farm simulation games are a bit of a niche, and if that is all you are looking for this one isn’t all that bad. It’s oddly satisfying to have leveled out a massive expanse of once mountainous terrain and have it planted with cabbages, and to think ahead of the elaborate hanging garden of Babylon, agricultural masterwork you will inevitably carve into the earth.
On the surface, The Lost Valley is a Harvest Moon game through and through. It follows the usual premise of cultivating a successful farm to help lift the surrounding village and its inhabitants back on their feet, but it aims to reinvent the series by straying off in new directions. Rather than taking over a decrepit farm and rejuvenating it for monetary reasons, the plot here takes on a more magical element.
rhadnard (38) on 25, Jul. 2017 23:02 (HKT)
New way of life
In this game you will be able to change the layout of the field on your farm, and its a new feature to the Harvest moon title.
The game is really good, but it has a big downside to the series, it has no village.
But the people come to your farm very often so its a bad/good change since you dont have to spend to much time walking to the village.
Aunpyz (8) on 25, May. 2016 16:40 (HKT)
Pretty fun game
It's something new for this series since the new team develop this game. The main pros is a huge plant field! and we also can adjust the field like in minecraft, though I'd love to have more freedom on the land.
Cons is this game doesn't have a town, townsfolks are just go into our place and walk around.
michaelkubi_1984 (1) on 30, Apr. 2015 19:18 (HKT)
This is not a
Since 2014, the well known and beloved "Bokujou Monogatari" series was called "Harvest Moon" outside of Japan. Natsume, who published the "Harvest Moon" series outside of Japan for a long time, has now created their own game. Thanks to the fact, that they owned the name "Harvest Moon", they kept it. The official sequel to "A New Beginning" and the "Bokujou Monogatari" series is now named "Story of Seasons" and got published by XSeed.

Nevertheless this game is not the real "Bokujou Monogatari" game, it feels like one. Natsume has done a great job with the newly added features to the farm sim genre.

They wanted the players to remind of older "Harvest Moon" games and it worked well.

Good:
+ customize a complete valley by terra forming
+ meet new people, with intresting stories
+ disvover many crop mutations
+ a better tool system makes it easier to work
+ new DLCs (based on the players feedback, some are even free of charge)
+ new system of chemistry to befriend someone (just talk daily to the people)
+ play as a boy or a girl (with the DLC you have access to two new outfits and hairstyles)
+ you can ask the harvest sprites for help (watering crops, fertelizing crops, planting trees...)

Not so good:
- there is no village
- there are just 3 bachelors/bachelorettes (CeeCee hinted, that the fourth DLC will have to do with love, so there is a chance for a new bachelor/bachelorette)
- the villagers seem really boring for the first days (but they aren´t if you befriend and get to know them)
- there are not many festivals
- the harvest sprites will only work for you every second day, because they need a break (at saturday und sunday they are not working, because the only appear from monday to friday)

I really enjoy playing the game and I´m looking forward to the fourth and last DLC in June.
sksim3 (5) on 25, Nov. 2014 12:52 (HKT)
Super Great HM game
Love all farming games, this game has a new feature which is quite challenging, where you have to find out how to plant mutated crops, eg a red cabbage, savoy spinach. Crops mutation happened depends on the ground level, weather on harvest day, grass type, fertilizers usage etc
Another interesting features is completing requests. You will get rewards or unlock certain thing in the game when you completed the requests
The only thing I dislike – the auto tool switching, the game auto equip the tool when you doing farm tasks, eg when planting crops the automatic flow is -> till->plant seed->water->fertilise, I may end up fertilised the square I wasn’t intended to if I didn’t place my selection square correctly.