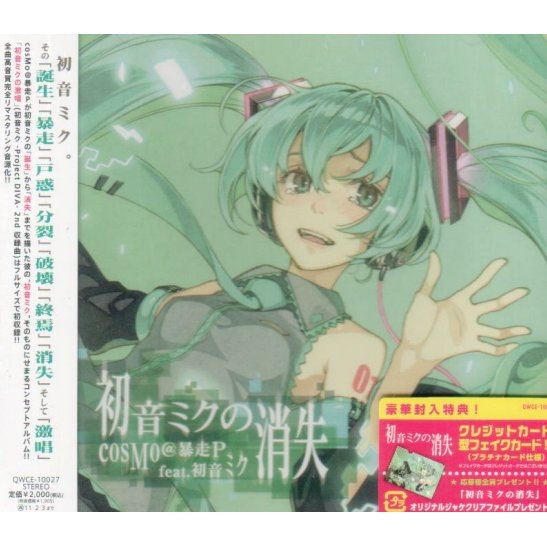 sold Out of print / Out of stock.
Please take note that, once purchased, this item must be paid immediately and cannot be cancelled or returned.
Manufacturer
Pony Canyon
Feature
Cosmo Bousou P Feat. Hatsune Miku
Rated By Our Customers
Version

If you are familiar with Hatsune Miku No Shoushitsu, why not let others know?

rockstar_peter (54) on 11, Apr. 2013 21:30 (HKT)
Hatsune Miku No Shoushitsu
It's a nice album that any fan of Hatsune Miku would definitely enjoy especially if you have heard some of the songs from other places.
daveyh444 (12) on 03, Jan. 2012 20:18 (HKT)
Nice songs, nice remastering
cosMo@BousouP hasn't been a producer I've loyally followed, I wouldn't say I was a huge fan of his work but this album has pushed my estimation of him/her up over the top.

Before I bought this (or rather recieved it as a Christmas present) I was familliar with a few of the Hatsune Miku no Shoushitsu series, namely Hatsune Miku no Bousou (初音ミクの暴走) Hatsune Miku no Shuuen (初音ミクの終焉) and Hatsune Miku no Gekishoku (初音ミクの激唱). as well as others like 0 and ∞. This album includes remastered/retooled versions of all of these songs. The use of the appends in these songs really works well as does the general (re)mastering. Those of you who bought Vocalogenesis may recognise Hatsune Miku no Bousou, the version in album has minor but noticable tweaks which really improve the overall sound of the track (e.g. some subtle effects on the vocal and guitar sound at the start as well as other all-around tweaks), others like the forementioned few generally sound a lot more populated and less sparse without over-doing it. General thumbs up on this front.

Tracks on this that were new to me before fit in well with cosMo@BousouP's work. His generally overly fast singing isn't present in all of these tracks, the tracks A.I and Asa Kiiro no Milestone (浅黄色のマイルストーン) are good to chill out to.

All in all, it's hard to fault this album for anything, a generally well-made album and the extra goodies (a little fake credit card and Miku strap) are the icing on the cake, just like the ones in other Exit Tunes albums. It may not be to everyone's tastes but it's well worth a try.
hungryluma (2) on 30, Aug. 2011 21:08 (HKT)
Wow! Being my first vocaloid miku album, I was so so happy when I got it!

This album is a compilation of music from her birth to her death. In this album you see as the music changes, how traumatic her life becomes as a vocaloid.

If you do not know about "the dissaperence series" by cosmo, do not buy this, you may be disappointed :<

For the vocaloid fans. Research the series first :) for cosmo fans, GET IT NOOOOWWWWW :3 !!

GET MIKUS FINAL GOODBYE~
zoiria22 (1) on 25, Mar. 2011 22:57 (HKT)
Great for Cosmo Fans...
As a "casual" fan of Cosmo-P, this album had some tracks that made it worth buying. However, I only ended up keeping 4 of the tracks on my mp3 player, and I was already familiar with 3 of those songs. More knowledgable Cosmo-P fans would probably enjoy this album far more then I would.

For a casual Cosmo-P fan, I'd rate this CD 3 stars; for a stronger fan, 5 stars.

I hadn't heard of "hyper inflation" before, and when I found the subs online I fell in love with it. The album's remastering of "Disappearance of Hatsune Miku" took a few listens to get used to, but I now find it superior to the original song. Certain songs, like "The End of Hatsune Miku," were improved tremendously by the use of Miku's appends.