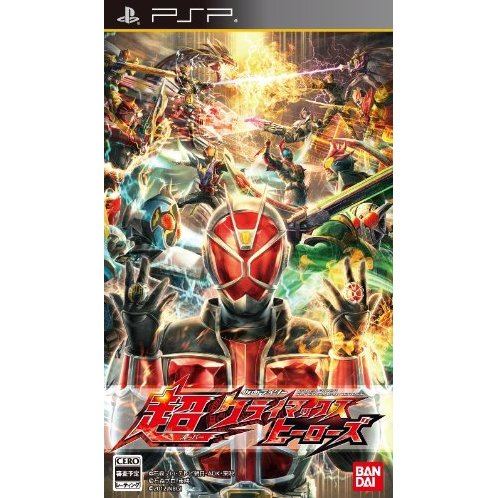 Works on all systems sold worldwide, a correct regional account may be required for online features.
24h In stock, usually ships within 24hrs.
US$39.99
Our previous price:US$ 59.80
You save: US$ 19.81( 33% )
Manufacturer
Bandai Namco Games
Rated By Our Customers
24h In stock, usually ships within 24hrs
Price
US$39.99
Our previous price:
US$ 59.80
You save:
US$ 19.81( 33% )
Play-Asia.com Return & Refund Policy
Trustpilot
Trustpilot
Click on a thumbnail to see more pictures for Kamen Rider Chou Climax Heroes

The Kamen Riders are entering a new battle in Chou Climax Heroes. The new game comes with more Riders and more battle modes. The new characters such as Wizard, Gills, Cosmic Stage and many others will show their fighting powers. The Riders also has many more forms and new skill sets. Come test them out in the challenging missions. The new battle modes include a Free-Run battle system, where gamers can run forward or retreat, giving their players more room to act. Receive points at the end of every battle so that you can upgrade your rider. During the battle, gamers can activate the super powerful skills they have seen in the TV series, fly the Rider to the air to shoot down at the enemies or release the Magna Blaze.

If you are familiar with Kamen Rider Chou Climax Heroes, why not let others know?

stuart.c.whyte (5) on 23, Dec. 2015 05:48 (HKT)
Best Rider PSP
I enjoyed this game a lot. Once you've got use to the new control systems, you can use your favourite Rider from a massive library from Kamen Rider 1 to Kamen Rider Wizard to fight.

Shame it's the last one so far...
biggestspiderfan (4) on 15, Jan. 2013 19:38 (HKT)
Good Fighting game
This is a Game to a series done right. The fighting is fun and at least later in the game it´s challenging too. The special moves are easy to use and there are a lot of fighters to choose from. Would have been great if this were on the ps3 and not also on the wii but still it´s a good game. One not only kamen rider fans but everyone who likes a good beat em up will have fun with.
Taco sauce (2) on 05, Jan. 2013 21:19 (HKT)
I could not stop playing when I got it!
This is a really awesome fighting game with tons of new characters and new skills you can use. Could not stop playing when I got it and it was so much fun playing it. really highly recommended.
nicolasmixson (1) on 24, Dec. 2012 06:15 (HKT)
Wow what can I say really great game almost can call it perfect with some characters movelist should be changed like kiva and agito but beside that greatest game for psp ever.
matix_0991 (3) on 23, Dec. 2012 10:06 (HKT)
great game really great