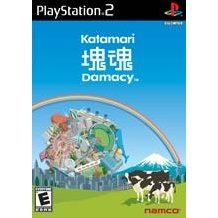 Bandai Entertainment
Rated
By Our Customers
Compatible with PlayStation 2™ (PS2™)
For US/Canada systems.

THE ROLLING, STICKING, NEVER-STOPPING, EVER-SWELLING CLUMP OF STUFF THAT MAKES A STAR OUT OF EVERYONE AND EVERYTHING!Cookies and kebabs, lawn mowers and lamp posts, synchronized swimmers and sumo wrestlers, bulldozers and windmills, giraffes and brontosauruses, Ferris wheels and cruise ships beware! The stop-at-nothing pushing prince is coming.When the King of All Cosmos accidentally destroys all the stars in the sky, he orders you, his pint-sized princely son, to put the twinkle back in the heavens above. How, you ask? By rolling everything and anything on earth into clumps, so he can replace what's missing in space.

If you are familiar with Katamari Damacy, why not let others know?

creafisher (60) on 23, Mar. 2012 14:46 (HKT)
Unique Gameplay
Best Simulation game.
Fun and Addictive.
sushi_b (58) on 14, May. 2011 13:12 (HKT)
One of the most unique games on the PS2.
There is so much to like about Katamari. The game is based on such a simple concept (collecting things with a ball to restore the stars in the universe) and works out very well. A great game for anyone because of it's simplicity.

Katamary works because it has likable characters, catchy music, and a great world to put together. the game is a little repetitive to be sure, but in small doses it's easy to get through. Highly recommended to gamers of all types. Give this one a go if you want something totally different and aren't afraid to try something new.
arthuroon (88) on 30, Mar. 2010 08:49 (HKT)
cute game
This game, while quite repetitious, allows you to totally relax and just enjoy the game as the in-game environment and music really sets the mood.

There's a degree of challenge in that you would have to roll up a certain amount of stuff before you are able to pass through certain checkpoints in the game in order to access bigger stuff that you can try to roll up as well.

You are able to roll up the most bizarre items from dice to cherries, to living animals like birds and rats. You'd be amazed at some of the items that you can actually roll over, even when you thought that you couldn't!

Best of all, the thumbsticks are the only means of controlling the game, so there are no complicated button mashing and combos to remember.

This game may be a bit short but the challenge is there and the replayability is actually quite high, considering that the game levels are actually quite well-designed and are quite large.

Get this game now before it runs out forever!
castleofbone (27) on 29, Jan. 2010 11:56 (HKT)
The first game!
I was so happy to find the first game of Katamari Damacy! It was a little short but soo much fun to play! You can roll up everything!
white__horses (10) on 28, Aug. 2009 11:39 (HKT)
No title
Extremely light-hearted after playing so many RPGs on the PS2, my only complaint with it is that it hurts the thumbs after a while of controlling the analog sticks...

I find this game extremely addictive though! It doesn't 'press' you to finish it either since there isn't much of a story. Ideal for playing when you just feel like gaming but have nothing in particular you want to play. (:
1 »