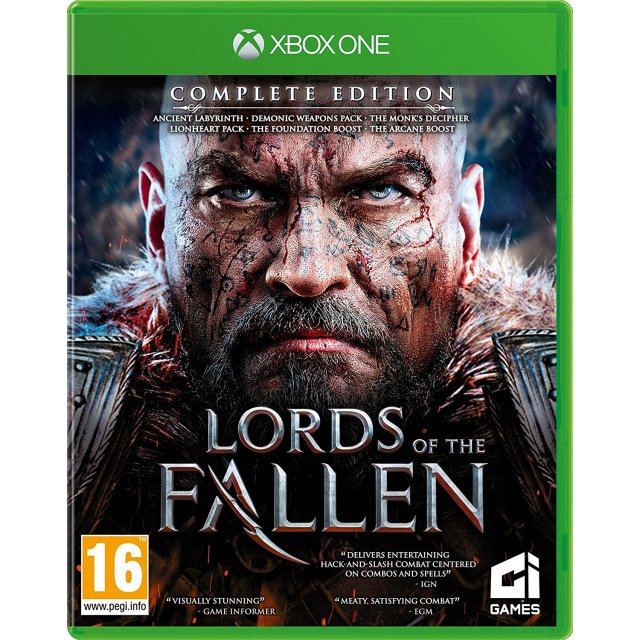 Lords of the Fallen [Complete Edition]

Works on all systems sold worldwide, a correct regional account may be required for online features.
2-4w Expected stock arrival within 2-4 weeks.
US$19.99
Manufacturer
Koch Media
Compatible With Xbox One™ (XONE™)
Version

Works on all systems sold worldwide, a correct regional account may be required for online features.
2-4w Expected stock arrival within 2-4 weeks
Price
US$19.99
Play-Asia.com Return & Refund Policy
Trustpilot
Trustpilot
Click on a thumbnail to see more pictures for Lords of the Fallen [Complete Edition]

In the Time of the Ancients, the Worldly Realm was ruled by a God of pure evil, who enslaved all humankind under his Dominion. But fear turned to anger as rebellion grew in the hearts of men - until the dawn of the Great Rising, when the fight for freedom began. After a glorious victory that cast aside the Fallen God, humans dictated a new order... a world where no sin can ever be forgiven and redemption was not an option.

Plunge into a fast paced action RPG with a complex and satisfying melee combat system where weapons, armor and skills directly influence the enemy's speed and attacks... if all else fails, lay waste to your foes using forbidden magic power.

The Elder Scrolls Online: Morrowind
US$ 10.19

No reviews for Lords of the Fallen [Complete Edition] yet.