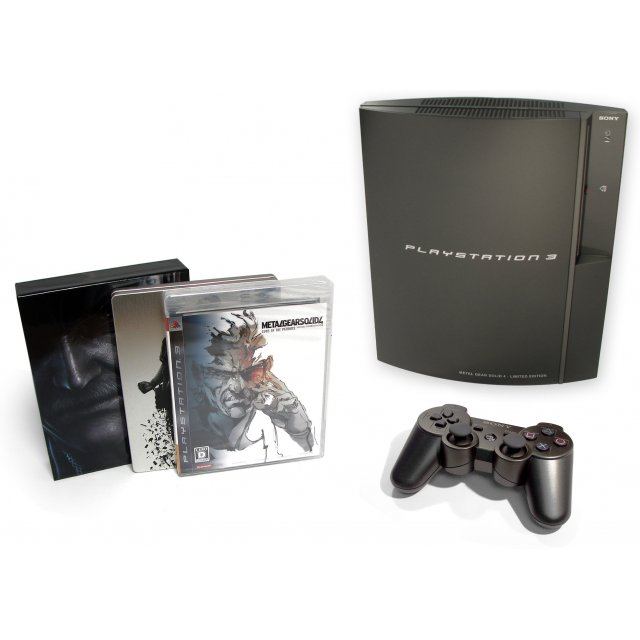 Konami
Rated
By Our Customers

Works with all games sold worldwide.
Get informed when this item is in stock by using our Personal Agent from the right.

sold Out of print / Out of stock.
Manufacturer
Konami
Rated By Our Customers
Version

Works with all games sold worldwide.
Get informed when this item is in stock by using our Personal Agent from the right.
sold Out of print / Out of stock


Click on a thumbnail to see more pictures for Metal Gear Solid 4: Guns of the Patriots [Premium Pack]

Metal Gear Solid® 4: Guns of the Patriots is the final chapter in the saga of Solid Snake which sends him around the world in pursuit of his arch nemesis, Liquid Ocelot. Armed with new gadgets and abilities, Solid Snake must shift the tides of war into his favor, using the chaos of the battlefield to infiltrate deep into enemy territory. In his globetrotting final mission, Snake must sneak deep into enemy locations in the Middle East, South America, and other corners of the earth to foil Liquid Ocelot’s plans for total world domination.

If you are familiar with Metal Gear Solid 4: Guns of the Patriots [Premium Pack], why not let others know?

Thanks to PA for giving the discount! : )
alsaif2 (2) on 27, Jul. 2008 03:59 (HKT)
thanks
thank u so much play-asia :)
ugrmister (1) on 19, Jul. 2008 11:14 (HKT)
ps3 mgs4
the ps3 is great. i heard that later on there will be a downloadable content for the ps3 in the play station network. allowing you to be able to play ps and ps2 games. but don't take my word for it
PuNiao (365) on 29, Jun. 2008 19:14 (HKT)
Metal Gear Solid 4: Guns of the Patriots
The white hair is showing and the wrinkles are obvious. Behind the dead eyes is a tired soldier who, in his last 20 years as a video game icon, has reshaped and revamped the stealth genre for millions of fans worldwide. But rather than simply decommissioning him, developer Konami and creator Hideo Kojima have crafted an incredible swansong for Solid Snake - one packaging great graphics, an intense storyline and formidable gameplay that culminates in an ultimate blaze of glory. The world of Metal Gear Solid is now filled with war, fought by mercenaries for hire. Old Snake is ageing prematurely (hence the new moniker) as a result of the cloning process that created the hero, but comes out of retirement to take out his nemesis Liquid Ocelot. Reunited with the majority of his supporting cast from previous outings, from Octacon, Mei Ling, Meryl and Raiden, the game also adds a plethora of gameplay elements that brings the action beyond the stealth genre, but still keeps the game firmly within its own universe. Instead of using a tranquilizer gun, Snake can now equip and use all weapons he finds and he finds plenty. Weapons can now be unlocked, upgraded and sold, via a gun-runner, enabling a seasoned combat veteran to customize guns to his advantage. Stealth still plays in conflict avoidance, but the idea is that if you are spotted in a war zone, you're more than likely to open fire rather then try to run for cover. Equipped with the Octocamo camouflage suit that mimics the color of Snake's immediate surroundings, Snake has the option of sneaking about and Kojima has balanced gameplay by peppering levels with waves of soldiers. Just because you've killed a few soldiers in an alley does not mean that more will not pop out around the corner to take their place. This freedom allows those inclined to action games to start blowing enemies away, while letting those used to sneaking around to play Metal Gear Solid 4 the way they want to.

The familiar radar has also been replaced by Mark II, a small roving robot that can be sent as an advanced scout to suss out enemy positions and even collect weapons and items. The older Snake must also contend with his age, as seen by the new Stress and Psyche meter. Keeping Snake constantly spotted or out in the open will raise his Stress meter, which in turns lowers his Psyche meter, which limits his effectiveness in combat. This is not to say that keeping both meters low is good because when they spike, Snake enters a combat "high" and takes on less damage. Whether it is escorting a team of new FOXHOUND soldiers or getting to a rendezvous unseen, gameplay constantly changes for Snake and this offers gamers a varied game to tinker with. In fact, there are many subtle changes that are too long to be listed, but rest assured, they add instead of detract from the excitement. Visually, Metal Gear Solid 4 is created to be viewed as a movie: as the well-acted and detailed cut-scenes return, each is created not merely to bridge the various levels of the game, but to form a larger narrative. Given the lengthy scenes, Kojima has added interactive elements into them, allowing players to view flashbacks during certain dialogue sequences with the press of a button. But despite the tales of death and destruction, Metal Gear Solid 4 does not strive to be a serious game with a moral tale. The game is filled with comic moments (look out for the one in which the soldier craps on himself) that remind players it's still a video game - albeit a very solid one.
mongchi.lin (8) on 15, Jun. 2008 02:08 (HKT)
Cons
Nice color, smooth, but fingerprints don't show on it. It's a PS3 system, but it's missing any sort of memory card media reader and has absolutely no PS2 backwards compatibility.
As far as the 40 gb hard, you could always swap it for a bigger store bought drive if you need the space.