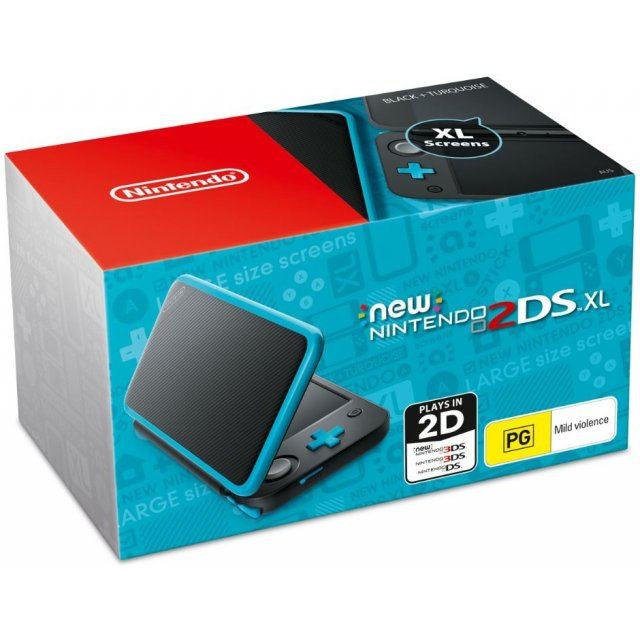 Nintendo
Compatible with PAL titles only.

The new, clamshell-design system will be available in a stylish black/turquoise colour, as well as in white/orange, and will use the same size large screen found on New Nintendo 3DS XL systems. As the name of the new system implies, visuals will be displayed in 2D only. The system is lighter but still packs the same power as New Nintendo 3DS XL, and has built-in NFC support for amiibo cards and figures. It can play the massive library of quality Nintendo 3DS, New Nintendo 3DS and Nintendo DS games in 2D. Nintendo systems are also the only dedicated video game systems where people can find their favourite characters and game franchises, such as Mario, Peach, Yoshi, Kirby, Pokémon, Fire Emblem, Mario Kart, Super Smash Bros., Animal Crossing and The Legend of Zelda.

There are over a thousand games in the Nintendo 3DS game library and more are on the way, including two that launch on July 29. These new games will offer fun new experiences for New Nintendo 2DS XL owners, and for owners of any Nintendo 3DS family systems.

- Hey! PIKMIN: In this brand-new style of Pikmin game, players guide Captain Olimar through 2D side-scrolling levels and collect Sparklium to refuel his crashed ship, the S.S. Dolphin 2, so he can escape the planet. The touch-screen controls let players choose the right Pikmin to toss at enemies and objects, which is critical to defeating foes and solving the many puzzles Olimar encounters during his adventure.

- Miitopia: Band together with your Mii and Mii friends to explore your own personalised world of Miitopia. Cast Mii characters into various roles and watch hilarious scenes unfold as they work together to defeat the Dark Lord who has stolen the faces of townspeople of Miitopia. Players can bring in their created Mii characters from Miitomo or Tomodachi Life, or create their own Mii team in the game. This game has a lighthearted tone with traditional and strategic RPG-like elements, including customisation, relationship building and team management.