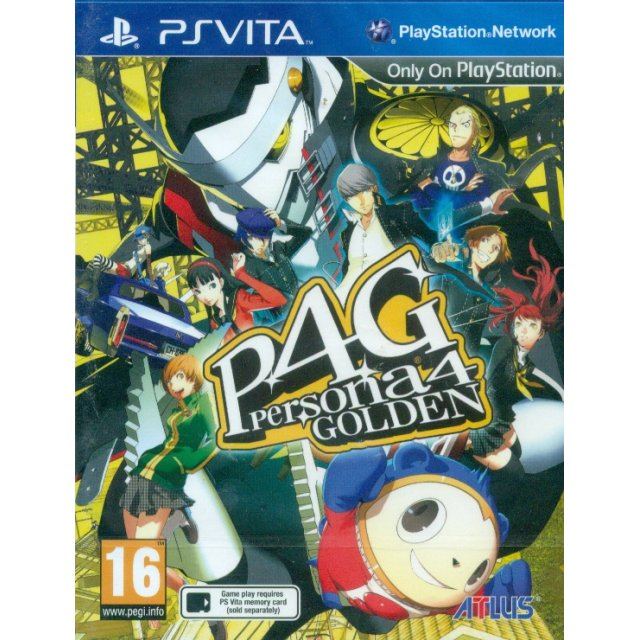 sold Out of print / Out of stock.
Manufacturer
Atlus
Compatible With PlayStation Vita (PS Vita)
Version


Click on a thumbnail to see more pictures for Persona 4: Golden

Following in the footsteps of Persona 3 Portable, the second highest rated PSP game of all time, and based on Persona 4, one of the most beloved ATLUS titles ever, P4G delivers an enhanced and expanded portable roleplaying experience. Visuals have been beautifully remastered to take advantage of the vibrant 5” OLED display. The game’s aural presentation is better than ever, with 1.5 times the voiced dialogue of the original release. A new online dungeon rescue feature allows users to call on other players for assistance when they are about to die in the TV world. P4G is also overflowing with new content: new Personas to collect; new story events along with an all-new character; stunning new anime cutscenes, which include a new opening animation with a new song from master composer Shoji Meguro; a host of fan suggested tweaks and changes, and much, much more! Persona 4 Golden is far more than just a handheld version of an all‐time classic: it’s the best way to experience it yet!

If you are familiar with Persona 4: Golden, why not let others know?

The story is about a high-school student who moves from a big city to a small town in Japan. In his first few days there, a series of really bizarre murders begin to take place, which the police has no clue how to solve. The protagonist just so happens to discover a new mysterious ability of his, that allows him to enter a new weird dimension, which he finds out is somehow connected with the murders. Our hero and his new friends take it upon themselves to stop the murders and save potential victims.

The gameplay is divided into two sections. The first is the battle section, where you explore dungeons, fight monsters and gain abilities and loot, and that takes place in the mysterious dimension. The second section, which takes place in our dimension, is the everyday life of the protagonist. You go to school, spend time with your friends, visit the shops and even take part-time jobs if you want. Both aspects play really well, and I haven't enjoyed turn-based combat like this for many, many years.

The soundtrack of the game is a funny thing. There are j-pop tracks that play during various occasions of the hero's everyday life, and even during battles. You might expect it to be distasteful and repetitive, but it somehow fits perfectly and makes the game even better. I loved the music of this game so much, that I put tracks like 'Heartbeat, Heartbreak' or 'Your Affection' when I want to relax or spend some time on my computer. The voice acting is also superb, something I rarely say about English voice acting in Japanese games. It's really that good. And while we're at it, the game doesn't have an option for the original Japanese voice acting, and that really the only bad thing I can think about Persona 4. Lastly, in a heavily focused Japanese game like this, expect to hear some Japanese expressions now and then, which won't be a problem if you enjoy Japanese culture.

Which brings as to the presentation and art style of the game. P4G portrays perfectly the average Japanese town and all its customs. P4G takes place in a beautiful little town, with rivers, traditional stores and shrines. I loved every new location I explored, and it never got uninspired or dull. The other dimension is also very well designed, each dungeon is very creative and some of them are a spectacle to the eyes. Each of the characters and monsters is meticulously designed, and they never feel dull.

Lastly, I would like to point out why P4G is so great: It gets you involved with its story and characters like very few games do. It's one of those games that you CARE about those fictional people on your screen. You care about the town and what happens to it. The story keeps you hooked until the murder case is solved. I've put 120 hours in this game on my first playthrough and all that time was precious.

Persona 4 Golden is a true gem, and those are becoming really rare nowadays. It is not to be missed by anyone, let alone a JRPG fan.