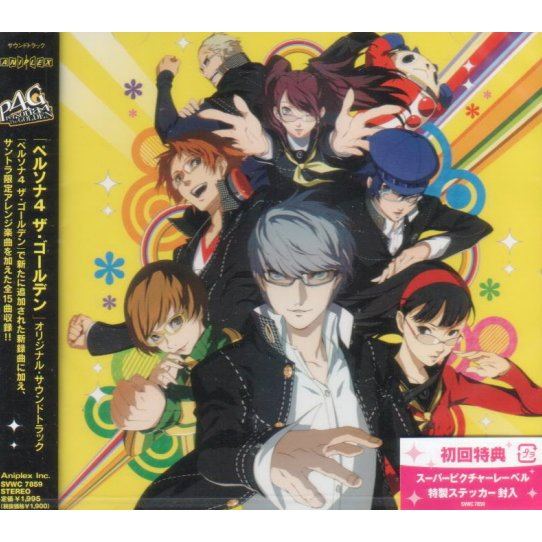 Aniplex
Rated
By Our Customers

The eerie yellow turns into gold. Persona 4 gets an upgrade when it makes it debut on the PS Vita. The Golden Original Soundtrack consist of 15 tracks, all of them are new compositions or arranged tracks. Kick start with Shadow World, the theme song. Feel the thrumming of your blood as you head into the hip and nostalgic TV World. Since the game follows the school calendar, the soundtrack contains music that represent the four seasons and all the important days. Go to the seaside with the Persona 4 cast, and feel the Snow Flakes floating down. From the heavy rock battle themes to the comical festival music, this soundtrack encompasses everything that is refreshing in the game.

If you are familiar with Persona 4 The Golden Original Soundtrack, why not let others know?

arwinjohn (25) on 14, Apr. 2016 21:13 (HKT)
Love the soundtrack
Memorable persona 4 golden soundtrack. I love it. Added it to my gaming music collection.
rebus.22 (63) on 06, Dec. 2014 19:51 (HKT)
Golden
I wouldn't normally listen to this kind of music but I enjoyed the game so much that the music grew on me.
mitchjay (1) on 24, Apr. 2013 08:49 (HKT)
Definitely worth of the title 'Golden'
I have both this and the original Persona 4 soundtrack (with plans to get Arena and the Reincarnation albums) and Golden has some of my favourite songs on it such as Snowflakes, which I find to be relaxing and wonderful to listen to.

If you've played Golden and enjoyed the music, then you should definitely get this. Was also packaged great so was very impressed with the service.
jp.brennan09 (31) on 28, Mar. 2013 07:33 (HKT)
Great Soundtrack
Comes with all the new catchy songs from Persona 4 Golden on PS Vita. It is best if you buy this with the Persona 4 Original Soundtrack if you want want the complete soundtrack collection.
aureron (24) on 08, Mar. 2013 11:42 (HKT)
Great but incomplete
If you want the complete collection, be sure to grab the Persona 4 soundtrack which includes all the other songs.
1 »