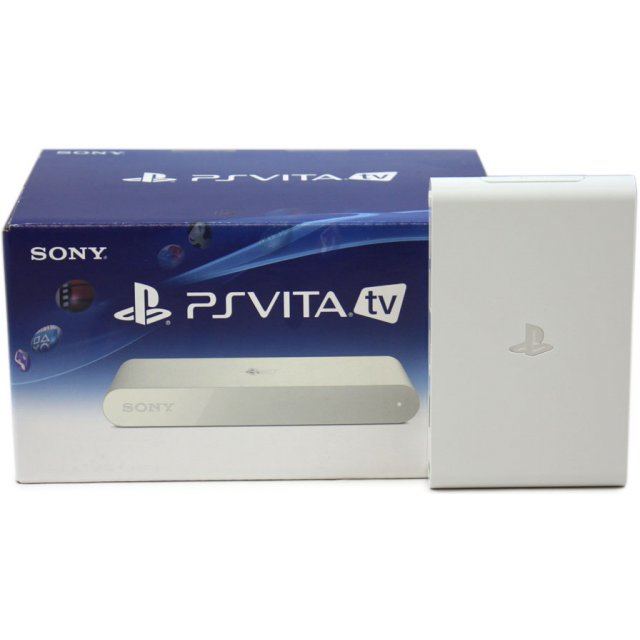 Another surprise reveal from Sony at the Pre TGS press con was the unvieling of the PS Vita TV, a brand new item in the growing Vita family. While the main idea of this tiny device is the ability to play Vita games on a television, the PS Vita TV is capable of a lot more. Measuring 6cm by 10cm - making this the smallest PlayStation hardware ever, the PS Vita TV has 2 card slots: for Vita games and Vita Memory Cards; it will connect to the DualShock 3 controller with future support for the DualShock 4. While this may already be appealing for those who would enjoy the Vita experience on a bigger screen, the PS Vita extends it's functionality by enabling video streaming services and more. PSone Classics and PSP games from a digital library can also be played; Remote Play with a PS4 is a definite possibility in the future as well. PS Vita TV has a Japanese release date on November 14th.

If you are familiar with PlayStation Vita TV, why not let others know?

mrsteve866 (2) on 18, Feb. 2014 08:34 (HKT)
vita tv
The ps vita tv works great only issue is while it will us games it needs to be supported. slo the browser works better than the regular vita.
jsdspiers888 (1) on 17, Dec. 2013 11:56 (HKT)
Good start, looking forward to US compatibility
Had mine for a few days. It’s a neat little box, and I’m hopeful that some OS updates improve the UI and the compatability list. Maybe the DS4 touchpad plays a role… I have a Jap PSN account on one of my Vitas, US PSN stuff doesn’t work at all. PSOne games look good (2D stuff like Gunnar’s Heaven and Einhander especially) – as good as PS3 emulated ones, though unlike their presentation on PSP and Vita, they are fixed at a 4:3 size and must be run at 720p (the Vita TV supports 480p-1080i). Vita games look great, though only tried four (Rayman Origins, Muramasa rebirth, Dragon’s Crown, Ninja Gaiden Sigma ), as most are incompatible (Killzone, DOA3, Sly Cooper, Rayman Legends, Tearaway, Unit 13, Little Big Planet, SF v Tekken, Need for Speed Rivals, Resistance, Metal Gear Solid HD). PC Engine stuff looks terrible at full screen, but original and 4:3 ratios are acceptable (on a 42" LED). It’s a steal at $99, assuming the compatability list grows, and the US PSN stuff comes over (some comments elsewhere suggesting not region locked, just that other regions not yet switched on). If you’ve invested in Sony’s digital library this makes a lot of sense.
mouseno4 (1) on 10, Dec. 2013 09:40 (HKT)
Currently impotent but built for the future
This review is of the PS Vita TV in its CURRENT FORM and as such does NOT indicate future functionality. 10th Dec 2013. Also, this review is for those NOT located in Japan or nearby countries or those who do not use Japanese products and services.

The PS Vita TV is full of potential, with games being converted to work with it from the PS Vita handheld game console, video streaming capabilities, Remote Play with a PS4 on the same network and games built specifically for it. But almost ALL of those features are NOT.YET.IMPLEMENTED. Keep this in mind when reading this review. They WILL work... but not yet.

Only Asian region specific cartridge based games will work, as well as digital games built and released on the Asian PSN. Out of my 12 cartridge games released for western audiences, only ONE of them works with the Vita TV.

PS4 Link, does not yet exist so there is no playing your PS4 games wirelessly from another room and TV in the house. You CAN connect directly to a PS4 via wifi, but i imagine that is purely for back up purposes only.

There are little to no games built directly for the PS Vita TV system so strike that from your list.

You CANNOT use this WHATSOEVER with a non-Asian PSN account. No, just no you cannot. Attempting it will result in an error forcing you to enter your correct Asian PSN account details. And since memory cards are account specific, games on a memory card that are not linked with an Asian PSN, just dont exist. Even inserting the card into the system requires a format to be ready for an Asian account.

And finally, services from the Asian PSN also do NOT work unless you have an Asian PSN account.

As noted, almost all of the above features only do not work RIGHT NOW. If you do not have an Asian PSN account, and plan to buy one of these, you will be limited to streaming content from a media server, playing the extremely limited western games that function on it, and MAYBE backing up what limited data you can actually generate on it to a PS4.

Why did i buy it? Because the day that all those features get switched on, will be the exact same day as i will have access to it. 5 minutes after its turned on, i can use those features, and it will be GREAT!