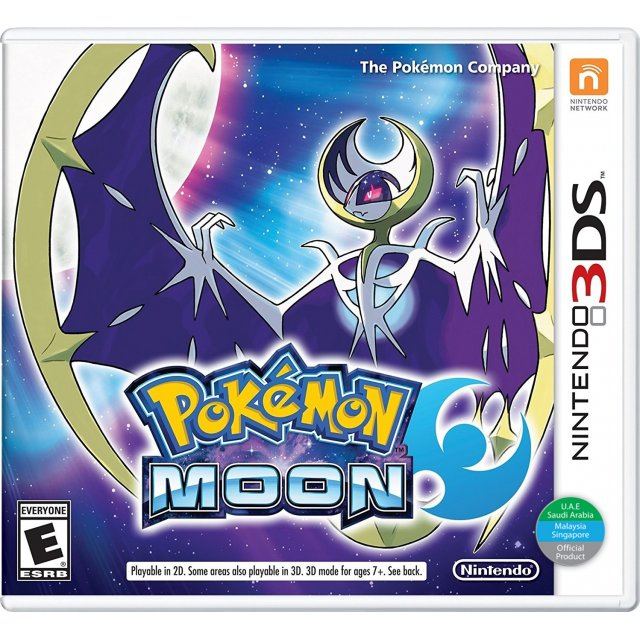 NTSC
24h In stock, usually ships within 24hrs. (Only 2 left in stock.)
US$33.99
Limited time offer - Secure yours now before the offer expires!

EMBARK ON A NEW POKÉMON ADVENTURE

In the Pokémon Sun and Pokémon Moon games, embark on an adventure as a Pokémon Trainer and catch, battle and trade all-new Pokémon on the tropical islands of the Alola Region. Engage in intense battles, and unleash new powerful moves. Discover and interact with Pokémon while training and connecting with your Pokémon to become the Pokémon Champion!

The Pokémon Sun and Pokémon Moon games for the Nintendo 3DS family of systems represent the seventh and latest installment of the core Pokémon series.

If you are familiar with Pokemon Moon, why not let others know?

Ambrose7 (16) on 03, Apr. 2018 10:35 (HKT)
One of best so far
After the slightly disappointing Gen VI, it's great to see Pokemon back up again. Graphics and soundtrack aside, (which are a gold standard for Pokemon games ) the more personal storytelling works wonders fo the game. The new gameplay mechanics are fun as well.
Eldariooon (89) on 02, Dec. 2017 12:11 (HKT)
Like re-reading a favorite book in an unfamiliar place.
Pokemon Moon combines a lot of my favorite things about Pokemon into an adventure that reminded me why I fell in love with this RPG series in the first place without simply repeating what came before. With equal attention given to role-playing and battle , it honors the 20-year legacy of Pokemon and improve upon it in a number of ways, making for a surprising and engaging tropical adventure that is as much about the journey as it is the destination.
awe.of.she.1 (173) on 07, May. 2017 10:44 (HKT)
The best Pokemon in years
Improves on the series formula in so many ways.
deoxys101 (3) on 27, Dec. 2016 18:14 (HKT)
Pokémon Moon (and Sun) is the best of the series by far.
I used to just see recent Pokémon games as an EV/IV inheritance simulator wrapped up in passable graphics and an okay story—that is, until I finished Pokémon Moon.

You see, I've been playing this game series for well over a decade now. I could have easily started with Gen 1, but my first console was a Game Boy Advance, so I started from there with Gens 3 to 6 and all the remakes in between. Nostalgia aside, I never really was attached to the story much. I guess the closest I got was with Omega Ruby's postgame, but that's really just some increased interest rather than full attachment. Gen 7, however, just turned everything around.

For the first time in my life, I felt sad after finishing a Pokémon game. I felt attached to the story all of a sudden—and I'm already 23. I couldn't believe it; I'd thought I was well past the age where a Pokémon game's storyline mattered to me. Pokémon Moon proved me wrong in the best way possible. Sure, it's not The Last of Us in terms of story, but it sure has surpassed all the Pokémon games before it.

It won't hook you like your favorite story-driven AAA titles, but it's certainly a welcome change of pace compared to what the series stood for before. The ambiance, the characters, and even the Pokémon themselves all combined to make a game that is not only worth playing for its improvements over its predecessors, but also worth playing for all the new things that it brings to the table. And going by how Pokémon Moon went, I can safely say that I haven't been this excited for the future of the Pokémon franchise before, even if I'm already well past the normal age demographic of the series.

Granted, I didn't like all of the new features (I'm not a fan of player connectivity options being exclusive to the Festival Plaza at all—I would have appreciated that all connectivity options remained in a revamped Player Search System (PSS) instead, which was introduced last generation), but that didn't stop me from enjoying this game at all.

Overall, I will gladly remember this game as one of the best in the series, if not the best of them overall. The drawbacks were there, but those did not ruin my experience of Pokémon Moon, which I'm glad to say is one of the best I've ever played in the series. I honestly can't wait for what this series will do next.

That fanmade commercial was true, after all (https://youtu.be/nkaPpwOhr8Y); I grew up and "evolved," and so the franchise grew up and "evolved" with me.
juliepeterson123 (2) on 27, Dec. 2016 13:02 (HKT)
Pokemon Moon is great!
The new generation of Pokemon games is fantastic and the improvements to game play are great overall. I always use Play-Asia to order my games as I live in Korea and I am unable to buy North American region games for my 3DS at the stores here. Play- Asia has reasonable prices and fast shipping so I know that I'll be receiving my games shortly after the release dates.
1 »