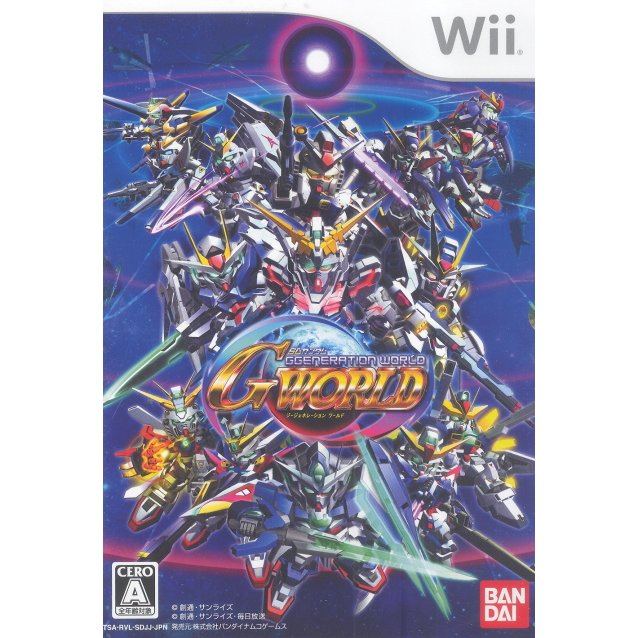 Boundaries get knocked down, all mechas come together in the SD Gundam G Generation for a full-on battle. The newest Generation World boasts the largest stable of Gundam mecha. All new models, such as the Unicorn and the upgraded mobile suits in the movie version of Gundam 00, are waiting for you to pilot them. Fly them to space and visit the colonies, the game consists of stages where you have to clear quests to advance.

If you are familiar with SD Gundam G Generation World, why not let others know?

[This review is based on another version of this product]
markruffin00 (1) on 22, Feb. 2012 02:08 (HKT)
Best Gundam Game I've ever played.
Seriously, If you like gundam,and turn based combat, and have always dreamed of having your own custom made team of Gundam Pilots and Mobile suits, then I would Highly recommended this game to you. This game may be a little pricey but you'll get about 30-50 hours of game play your first play through, so IMO well worth the money.

The only down side to this game is the after you beat it there is not really a good reason go back and play all the missions again on Hell mode.
[This review is based on another version of this product]
starspejd (1) on 17, Nov. 2011 15:16 (HKT)
A worthy successor
SD Gundam G Generation Worlds is a great game, worthy of succeeding the previous instalments. This opinion may be biased as I've only played Wars and Worlds, but of the two, I like Worlds better.
I don't understand any of the writing, but luckily I have a brother who can help translate names and break conditions. The generation breaks are great, sometimes adding a lot of tension to already hectic battles, though this really only applies the first time you play a map :P.
The Secret Challenges are fun to trigger - and let's face it: We ALL want to blow up Meer and her pink Zaku (well, maybe not the Zaku...)
All in all a great game. I have no idea how many hours I've put into this over the past week, but it's the only thing that's been in my PSP since I got it.
[This review is based on another version of this product]
WingedHao (46) on 08, Jul. 2011 21:20 (HKT)
Alot more MS and ships when compared to "SD Gundam G Generation Wars" but those who have already beaten Wars may not find this as appealing. This version also allow players to create thier own custom characters but the feature itself lacks customization.
[This review is based on another version of this product]
cody0999999 (10) on 21, May. 2011 16:01 (HKT)
Fun at first, but can get boring
Well like my subject says the game started out to be pretty fun ,but it just quickly got old for me. They really didn't change it much from War so that is why it got boring for me so quick,
[This review is based on another version of this product]
kirahero5 (69) on 12, May. 2011 09:18 (HKT)
Awesome Gundam Tactics game!!
for a tactic game, this game has a lot of content, almost all mobile suits are obtainable and useable and the number of characters usable also a much inrcrease than the G gen Wars, but the graphics is lacking, I would prefer the game to be on PS3 with a much upgraded graphics or even ps2, but overall its a good solid game, and I have spent over 80 hours in this game!!! must get for everyone!!!!!!!
1 »