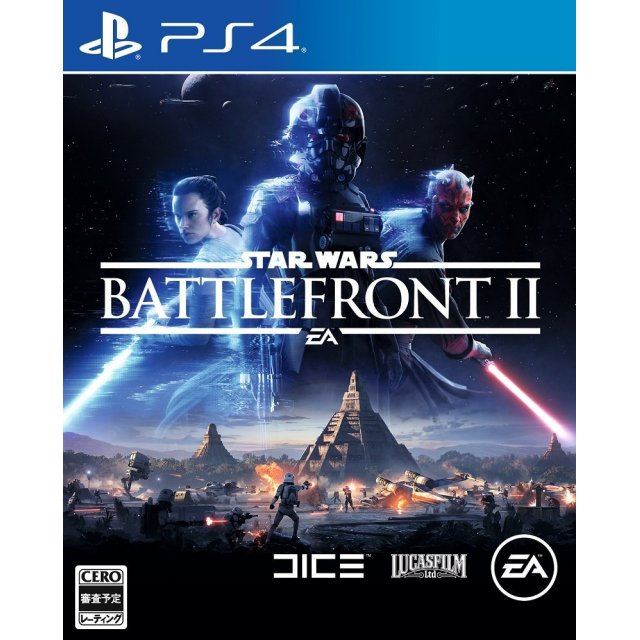 Works on all systems sold worldwide, a correct regional account may be required for online features.
1w Expected stock arrival within 1 week.
US$46.99
Our previous price:US$ 69.99
You save: US$ 23.00( 33% )
Manufacturer
Electronic Arts
Rated By Our Customers
Compatible With PlayStation 4™ (PS4™)
Version

Works on all systems sold worldwide, a correct regional account may be required for online features.
1w Expected stock arrival within 1 week
Price
US$46.99
Our previous price:
US$ 69.99
You save:
US$ 23.00( 33% )
Play-Asia.com Return & Refund Policy
Trustpilot
Trustpilot

Click on a thumbnail to see more pictures for Star Wars: Battlefront II

If you are familiar with Star Wars: Battlefront II, why not let others know?

[This review is based on another version of this product]
Imation (451) on 27, Aug. 2019 02:05 (HKT)
excellent game
Each time a new version of this franchise appears, it is becoming better than the previous one, it even retains the possibility of playing 2 people on the same console and this edition is the one that has multiple languages
[This review is based on another version of this product]
templarsworld (1) on 05, Jun. 2019 14:04 (HKT)
THERE IS NO SAFE PLACE
all i can say is that that you don't choose to be part of the EDF the EDF chooses you! enlist today at your local recruitment center... plus you get a pretty sweet pension plan
1110adrilibra (235) on 12, Mar. 2019 18:31 (HKT)
Poorly design
The shooting does not feel satisfy at all, i will still go with titanfall or call of duty for my shooter needs
[This review is based on another version of this product]
sonicmeerkat (38) on 10, Jan. 2019 12:43 (HKT)
The worlds only hope
Graphics EDF/10
Story EDF/10
OST EDF/10
Controls EDF/10
I encountered thousands of bugs during gameplay please be aware you will need to be ready for them in nearly all levels.

We need more soldiers on the ground enlist today civilian.
[This review is based on another version of this product]
danbal76 (104) on 20, Jun. 2016 12:56 (HKT)
Nice action game.
Not as good as the two previous games in the series, but a nice action game nevertheless.
1 »