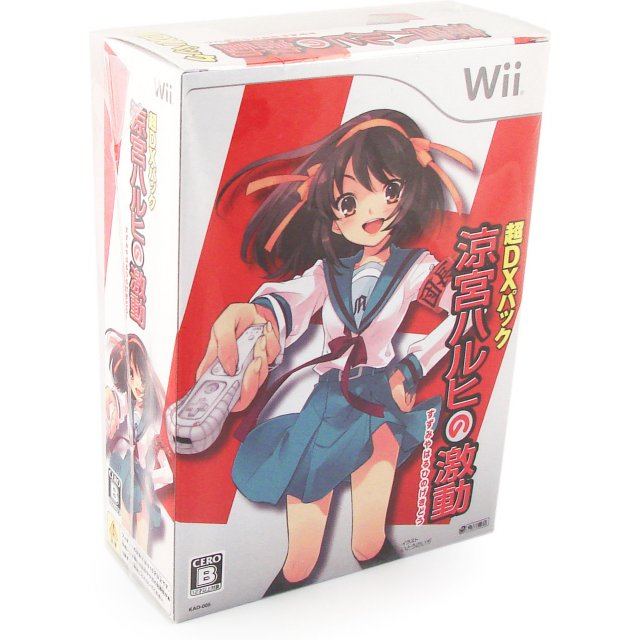 Join the SOS brigade and dance to your heart's desire. Haruhi Suzumiya no Yuutsu the anime has made two entities famous, Haruhi's seiyuu Hirano Aya and the girls' dance Hare Hare Yukai. After the airing of the TV series, numerous people have learned to dance the steps to the song and demonstrated their talents in both small and large events.To those who has trouble following the quick steps from the TV screen but is dying to learn and join the fun, this is the game for you. Follow the cues on the screen and wave your Wii-remote control accordingly. If you manage to catch the cues properly, Haruhi, in full Hirano Aya glory, will pay you compliments, and if you did badly, she will scold you.There is a story mode and a free mode. Haruhi has read a flier on a dance competition in the story mode and is making her club go along with her. The more stages you clear in this story mode, the more costumes you can unlock, and the better you do, the rarer the items you can get. Ask two more friends to join you in the free mode and play the roles of the SOS brigade girls, see who is the best dancer amongst you.

If you are familiar with Suzumiya Haruhi no Gekidou [DX Pack], why not let others know?

stu1109 (2) on 14, Sep. 2013 13:14 (HKT)
Great for the Fans!
Fans of Haruhi will get a kick out of this (obviously), however the motion detecting can be a little off at times. Still, there are plenty of unlockables and bonuses to keep future SOS Brigade members happy!
[This review is based on another version of this product]
Kim-Kim (8) on 05, Feb. 2010 01:19 (HKT)
For die hard Haruhi fans only
Haruhi no Gekidou is a dance game which utilizes the Wii Remote to allow you to dance to popular songs Haruhi theme and character songs whilst you watch Haruhi and friends dance to them in pretty well animated motion captured movements.
Now before all you nerds who memorized the Hare Hare Yukai dance routine off by heart rush to buy this; the gestures asked from you in game only very loosely correlate to the dance routine performed by the girls onscreen. Not only that but motion detection is actually a little rough. If you don't know Japanese you might have a hard time understanding how you're supposed to hold and move the Wii mote around.
There's a story mode too which has little dialogue sections which require you to know japanese if you want to know whats going on.
Another thing; if you buy the special edition that comes with the bonus disk and the Frauline Revoltech Haruhi figure, the figure itself looks pretty good, but seems to have very loose arm joints which come off very easily. The bonus disk is pretty disappointing since it contains 4 videos; three of which are trailers and commercials for the very game it comes with, and the extra video is of Aya Hirano making the commercials and playing the game, which is fine I suppose if you like to watch her do stuff.
Dispite the negative things I've said though, as a Haruhi fan I did enjoy this game; the song selection is pretty cool and it does feature a few bonus games and features which will keep you entertained. Once you learn how to hold and move the Wiimote it's quite enjoyable to dance as well. If you never really liked Haruhi much you'll not find anything here to keep your interest unless you like the song genre.
[This review is based on another version of this product]
dkf82 (53) on 11, Sep. 2009 21:33 (HKT)
awesome dancing game
this game is fun,u use the wiimote to make the specified movements,u have to move with a certain timing indicated by a figure in the downside of the screen,some times u have to move and press A button,B or shake the wiimote,this adds some difficulty to the game which makes it more fun,depending on ur score and rank u r able to unlock some secret items,customs and secret charatcers to play in free mode,in story mode u can play has Haruhi,Yuki or Mikuru depending on the levels and story phase,but in free mode u can choose any of those 3 chars and change the customs u have unlocked,my fav is Yuki :p