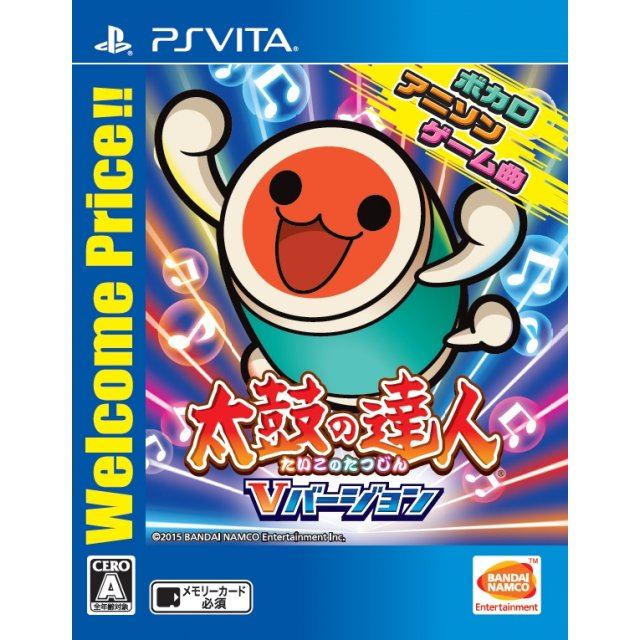 Works on all systems sold worldwide, a correct regional account may be required for online features.
24h In stock, usually ships within 24hrs. (Only 1 left in stock.)
US$34.99
Our previous price:US$ 41.99
You save: US$ 7.00( 17% )
Manufacturer
Bandai Namco Games
Rated By Our Customers
Compatible With PlayStation Vita (PS Vita)
Version

Works on all systems sold worldwide, a correct regional account may be required for online features.
24h In stock, usually ships within 24hrs
(Only 1 left in stock.)
Price
US$34.99
Our previous price:
US$ 41.99
You save:
US$ 7.00( 17% )
Play-Asia.com Return & Refund Policy
Trustpilot
Trustpilot
Click on a thumbnail to see more pictures for Taiko no Tatsujin V Version (Welcome Price!!)

Taiko Drum Masteris a classic Japanese rhythm game first released in arcades in 2001with gameplay similar to most rhythm games, as players are tasked with keeping up with thevarious drum beats thrown at them!

Taiko Drum Master will also include an intriguingnew game mode called 'Donda Quest,'which will reportedlycombinegameplay from therhythm game with fantasy RPG-style battles. The player will controlDon-chan, who was pulledinto a mysterious book and together with the heroine Maple will fight anddefeat an ancient dragon known as 'Revolution.'

If you are familiar with Taiko no Tatsujin V Version (Welcome Price!!), why not let others know?

[This review is based on another version of this product]
Prinny (7) on 09, Jun. 2016 04:24 (HKT)
Great rhythm game
I got this game to see how well rhythm games fair on the vita compared to the 3ds(games like rhythm heaven come to mind) and boy does it not disappoint! The menus can take a bit to get used as they're all in Japanese but you can find menu translations online if you need them. The only thing I'm worried about is damaging my buttons from continued use but so far nothing has happen. Anyway this is a nice, colourful game to play in short bursts as I find playing for too long can lead to some frustration if you just can't keep your combo up.
[This review is based on another version of this product]
justice_levi (36) on 06, May. 2016 00:58 (HKT)
Fun and enjoyable music rhythm game, easily played knowing zero of the language.
I bought the Chinese sub version as it was on sale. Didn't matter the version, I only speak English, so it was all about the cheaper price.

I'd played the demo on my Japanese account and liked it. And being a pretty big fan of music rhythm games of late, this was an easy one to decide to import.

The Donder Quest is an RPG mini-game/side element of the game, and you won't know anything that's going on. Thankfully the stats show blue for getting worse and red for getting better so you can at least get SOME gear setup with that and with trial and error. And there's help to be found online if you have a language barrier, such as is the case with me.

But even going in totally blind it'd still be very enjoyable. There's a LOT of songs on the cart, so I don't mind playing on my US account at all and not being able to get DLC song packs, though that would be cool.

Gameplay is simple to get down, and easy enough to do well enough on Easy, but if you want to ramp it up the game easily has you covered, I would say. There's some impressively simple things it does to keep ramping up the difficulty for how simple the overall concept and gameplay is.

Song variety is pretty good too, though I wish there was some more traditional taiko drum music without vocals. But even still, more variety than I expected.

If you like music rhythm games and even if you can't understand a lick of the language, this is an easy game to recommend. It is VERY 'import friendly' for sure.
[This review is based on another version of this product]
dawkurp (2) on 11, Nov. 2015 16:33 (HKT)
Very playable without knowing Japanese
Just do yourself a favour and beat the RPG Donder Quest - it unlocks the remaining songs and most of the content.
[This review is based on another version of this product]
timborobot (14) on 22, Sep. 2015 03:34 (HKT)
Taiko
Awesome and simple rhythm game, some tracks will even challenge veterans.
[This review is based on another version of this product]
vincentnormand (8) on 13, Sep. 2015 22:42 (HKT)
A very good game for every rythm game fan.
There are a lot of positive stuff in this game : The enjoyable track list, the very well balanced challenge ( the game is easy enough for a casual gaming and tricky as hell for hardcore gaming), the RPG mode is a great idea, and the costumes are cute....
Then you can play the game in Japanese without knowledge in Japanese but : you will not understand the story of the RPG mode, then it is difficult to know the effects of the items. But because the RPG mode is mostly a challenge mode, you will understand easilly what to do to win.
Finally : There is no touch mode! The PSV has 2 touch sceens and you Taiko no Tatsujin is a game in which you play drum with only 2 types of action buttons. So the PSV could be the best system for this game.
1 »