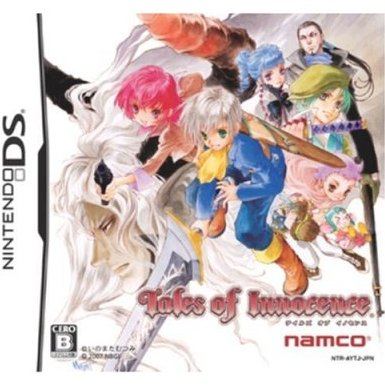 Works on all systems sold worldwide, a correct regional account may be required for online features.
1w Expected stock arrival within 1 week.
US$72.99
Manufacturer
Bandai Entertainment
Rated By Our Customers
Compatible With Nintendo DS™ (NDS™)
Version

Works on all systems sold worldwide, a correct regional account may be required for online features.
1w Expected stock arrival within 1 week
Price
US$72.99
Play-Asia.com Return & Refund Policy
Click on a thumbnail to see more pictures for Tales of Innocence

The Imperial Capital of Regnum kept itself in peace during the long-lasting world war. Slowly, people with a "special power" began to appear. Feared by normal people, Regnum set out a law to capture all people with special powers. One day, Ruca, the son of a merchant in Regnum, realizes the special power within him...

If you are familiar with Tales of Innocence, why not let others know?

stef_radda (2) on 14, Feb. 2015 10:47 (HKT)
Fantastic :D
I've played many games in this series, and they never fail to disappoint.
Kyown (11) on 25, Oct. 2010 12:45 (HKT)
Easily the Best Tales Game on the DS
This game is completely amazing. The battle system is top-notch and easy to learn. And the game is very friendly. I barely know any Japanese but had no troubles completing the game.
coastline05 (3) on 20, Feb. 2009 11:42 (HKT)
Awsome Game!!!
This is my Favorite Ds Game Ever!It has the Best graphics,Awsome Gameplay,Great Music,and its a Very Addictive Game.If you have a Nintendo Ds Buy this Game!It is Definitely worth the money!100% 5 stars.
a745 (9) on 05, Apr. 2008 15:37 (HKT)
Must Have RPG for the DS~
I'm not saying this as a Tales fan. The game has a pretty good storyline in my opinion. The character AI is very reliable (they do combos to support your own combos and heal you when needed, even at the default settings). The actual storyline isn't that long at all, but you'll be spending most of your time in dungeons and leveling up. The dungeons are somewhat similar to Tales of Legendia (in other words, HUGE), so that part gets annoying a bit. Character development (especially on the hero's part) goes by smoothly, and goes through a series of phases (shy, maniacal, heroic).

Graphics are just beautiful for a DS game. Especially the cities.

Skits will keep you entertained most of the time, but sadly, not all are voiced. Having a good grasp of the Japanese language will make you enjoy the game more, as most of the humorous parts of this game are in the skits.

And lastly, the battle system is wicked. It's a whole lot more fast paced compared to the previous games... which kind of makes you so absorbed into the game during fights, especially at that extra dungeon... ;P
holybible2 (2) on 20, Dec. 2007 09:19 (HKT)
Good game
I bought this in Japan before I bought FFIV DS and I love the Tales series better than FF series this is my first one for the DS. Even though my Japanese isn\'t so good and can only understand a little of the story its still a great game. it would of been nice if they would put hirgana over the Kanji like in Phanton Hourglass.
1 »