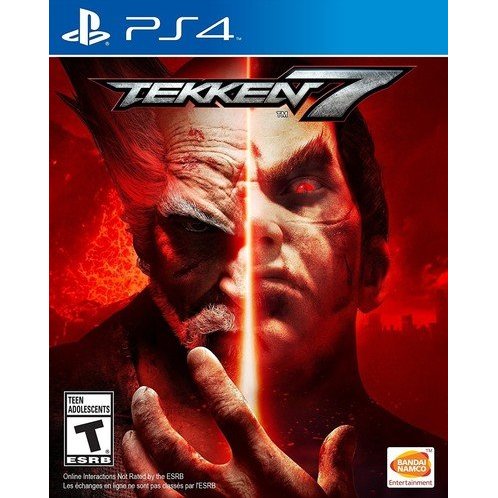 Works on all systems sold worldwide, a correct regional account may be required for online features.
1w Expected stock arrival within 1 week.
US$19.99
Our previous price:US$ 59.99
You save: US$ 40.00( 67% )
Bandai Namco Games
Rated By Our Customers
Compatible With PlayStation 4™ (PS4™)
Version

Works on all systems sold worldwide, a correct regional account may be required for online features.
1w Expected stock arrival within 1 week
Price
US$19.99
Our previous price:
US$ 59.99
You save:
US$ 40.00( 67% )
Play-Asia.com Return & Refund Policy

Click on a thumbnail to see more pictures for Tekken 7

Continue the hardcore action in Bandai Namco's latest release TEKKEN 7! This ninth entry to the famed fighting game series TEKKEN concludes the story of the Mishima clan saga and unravels other mysteries that has baffled players throughout the series. Enjoy all new characters, modes, and mechanics as possibly the best ever TEKKEN game to be launched; Bolstered by the UNREAL 4 engine, this epic fighting game will smash its way into next gen consoles.

Enjoy a one-on-one battle made rich with exciting new gameplay mechanics like the Rage Art, that allows players to execute powerful attacks when their health gets low giving them a last ditch attempt for a comeback. Another is the Power Crush which allows players to continue their attacks while being hit by the enemy. Item Moves and Stage effects will also be returning to the game to let players fully immerse themselves in the battle ring.

If you are familiar with Tekken 7, why not let others know?

khizerpiece (4) on 26, Feb. 2019 23:01 (HKT)
Great gameplay, disappointing singleplayer.
It plays like a dream, I enjoy the fighting mechanics greatly, however the story was quite poor.
Aalt (74) on 07, Sep. 2018 15:40 (HKT)
Want Tekken? You get Tekken
It's been a solid decade and then some since I last time played Tekken, and picking this up it felt like going home that somebody had renovated. If anything, the series has tried to renew itself from time to time, and the addition of Rage Arts and such aren't exactly the best things added. They much up the core gameplay.
Outside this, the core gameplay, whilst very much same as with any previous Tekken entries, feel heavier, weightier. Punches always had some wight behind it, but now it feels like characters have overt momentum to them. Despite this, the same animations that were in the series sicnce Tekken 3 still persist and as a whole the game looks and feels like something that was made twenty years ago with no real changes. Just new furniture and lick of paint here and there.
A solid title nevertheless.
leandrorizzato (216) on 17, Aug. 2018 00:45 (HKT)
Good Game.
A good game, but SFV was very better. Good graphics and musics. A cool gameplay and combos, but I really prefer SFV, than this game, to say a fighting game. You can fun on online battles and local battles with friends.
joseargao (25) on 13, Jul. 2017 13:08 (HKT)
Not perfect, but still a great game
Tekken 7 shows signs of being rushed, with the story mode being fairly lackluster for non-Mishima characters and not that many features or modes aside from the main arcade mode and online/offline versus.

But the stuff that did make it into the game is top-notch. Great graphics and great gameplay combine with an awesome training mode and various tweaks to make the gameplay more exciting to make Tekken 7 a premier fighting game for the PS4.
Cofferpara (2) on 08, Jun. 2017 16:15 (HKT)
Good Old Tekken
Kudos to Play Asia for prompt delivery.

Pros:
- Tekken gameplay at its finest
- Great roster, the addition of Akuma is great
- A lot of content, treasure battle, gallery mode and jukebox mode are nice additions

Cons:
- The story mode sucks
- Stories for non-Mishimas are non-existent
- Arcade mode is too short
- Online is bad at the moment, hope they fix it soon
- 25$ season pass