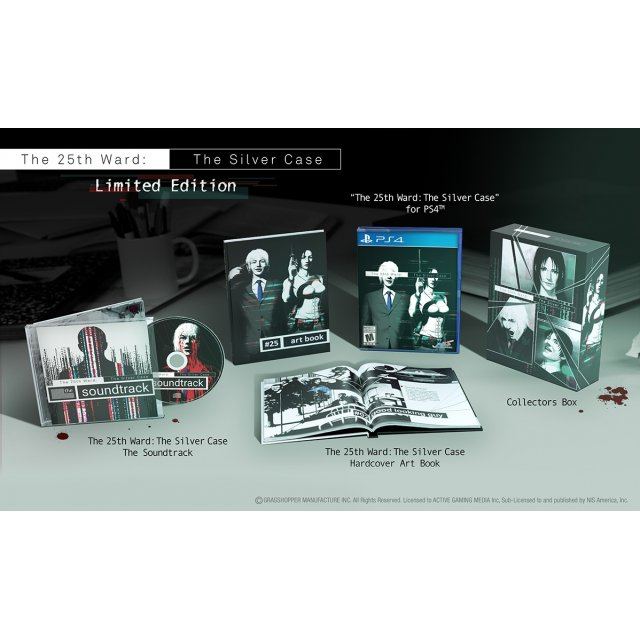 Works on all systems sold worldwide, a correct regional account may be required for online features.
24h In stock, usually ships within 24hrs.
US$47.99
Manufacturer
NIS America
Compatible With PlayStation 4™ (PS4™)
Version

Works on all systems sold worldwide, a correct regional account may be required for online features.
24h In stock, usually ships within 24hrs
Price
US$47.99
Play-Asia.com Return & Refund Policy
Trustpilot
Trustpilot
Click on a thumbnail to see more pictures for The 25th Ward: The Silver Case [Limited Edition]

It is five years since the events of 1999’s The Silver Case, set in the new 25th Ward that arose in the bayside area of Kanto. In a room of the “Bayside Tower Land” apartment complex, a woman is found murdered under mysterious circumstances. This sets off a series of seemingly random events bridging across multiple protagonists including The Silver Case’s Morishima Tokio. With all viewpoints assembled, a truly shocking pattern emerges. Available for the first time outside Japan, The 25th Ward: The Silver Case is presented with completely rebuilt HD assets and additional content not found in the original version.

Envelop yourself in the world of The 25th Ward with the Limited Edition version. Featuring an alluring, dark soundtrack encapsulating all three Arcs of the title, a slick hardcover art book featuring the world built around “The Silver Case” and an excellent, display-quality box. Available for a limited time for PlayStation4.

If you are familiar with The 25th Ward: The Silver Case [Limited Edition], why not let others know?

[This review is based on another version of this product]
dr.good (2) on 12, Nov. 2017 14:22 (HKT)
The Silver Case
Stunning and extremely unique visuals and music, charming characters, intricate and thrilling story
I highly recommend it