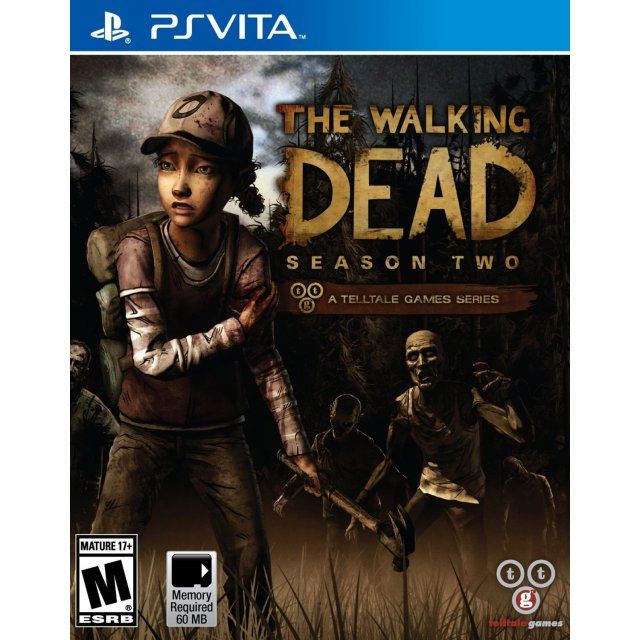 Works on all systems sold worldwide, a correct regional account may be required for online features.
1w Expected stock arrival within 1 week.
US$23.99
Our previous price:US$ 39.99
You save: US$ 16.00( 40% )
Manufacturer
Telltale Games
Rated By Our Customers
Compatible With PlayStation Vita (PS Vita)
Version

Works on all systems sold worldwide, a correct regional account may be required for online features.
1w Expected stock arrival within 1 week
Price
US$23.99
Our previous price:
US$ 39.99
You save:
US$ 16.00( 40% )
Play-Asia.com Return & Refund Policy

Click on a thumbnail to see more pictures for The Walking Dead: Season Two - A Telltale Games Series

The Second Season of the Award Winning Franchise:

After the success of the first season, The Walking Dead franchise is ready to launch its newest installment. Telltale Games brings to life once again the second season of the best-selling and award winning graphic novel of Robert Kirkman in The Walking Dead: Season Two - A Telltale Games Series. Following the story and gameplay of the first season that won over 90 Game of the Year Awards, this episodic video game series will follow Clementine, the player-character in Season Two.

A Young Survivor Turns Into a Warrior:

“Do you think things will ever get back to how they were?” After the tragic death of Lee Everett, Clementine, a young survivor who was the player’s acquaintance throughout the first season, sets off in a new terrifying adventure in a world devastated by the undead and treacherous people.

Horrifying Choices That Lead Into a Terrible Outcome:

Players will be forced to make horrifying choices that will have a permanent impact on the future story elements. The choices made in the first season and the additional episode 400 Days will cause a huge effect in the second season; while Season Two can be enjoyed by itself, the full experience is in the combination of both.

If you are familiar with The Walking Dead: Season Two - A Telltale Games Series, why not let others know?

Zack00 (9) on 17, Sep. 2017 02:08 (HKT)
Good Game!
Well its a good game to fill your break-time in one shot play, cause no use trying to play again and choosing different choice , cause just like the First season the outcome cannot been change , you can only choose on the last part between two people who will remain with you, well they should not killed Lee on first season , the game probably will be better with Lee still alive .
francisco.noh.moo (21) on 31, Aug. 2017 10:12 (HKT)
Excelente juego
Buen juego , entretenido ya llevo unas horas con el
Xerpent (189) on 23, Sep. 2016 06:22 (HKT)
Another Telltales masterpiece
Walking Dead always been my #1 most favorite among Telltale's games. Looking forward for Walking Dead: Season 3 this year!
MagixMan (48) on 08, Sep. 2016 16:43 (HKT)
The continuation of an already awesome series
Telltale games amazes us once more with their story driving game. This time it's the sequel of the first season of TWD, which centers Clementine as our protoganist.

The only complaint I have with the game are the sometimes choppy framerate and loading times. Other then those minor problems, it's a great game to an amazing serie!
Lord Kite (110) on 09, Jan. 2016 03:51 (HKT)
Good game!!
The Walking Dead Season Two follows the trail of playable anything seen in the first season. Continue the exploration and interaction with the environment being present, the dialogues in which we make decisions that affect our relationship with the characters and action moments the style Quick Time Event. The playable members remain the same and except for a small facelift in the interface, when playing no big surprises.

If any part of the history and the Clementine own, somewhat higher than in the first season and, above all, self-sufficient and mature (to remain a girl). And, along its 5 chapters, again, with an average duration of between 2-3 hours, we will have to overcome all kinds of difficulties, how to survive a new psychopath named Carver (voiced in English the always brilliant Michael Madsen), in addition to meeting new friends and allies.

It is also true that Telltale Games has tried to go a little further with the system making, trying to be more scenarios and variations as we choose ... but the fact remains that still hovering feeling, for most of the game, that, whatever we do, we will end up coming to the same point.
1 »