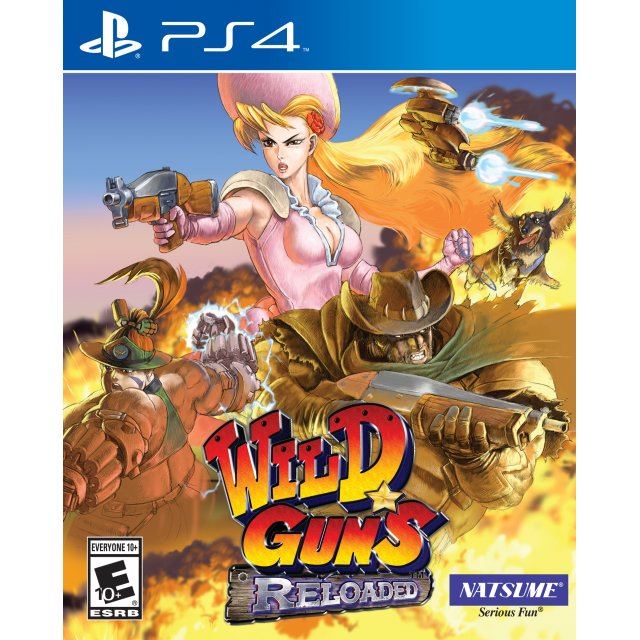 Natsume
Rated
By Our Customers
Compatible with PlayStation 4™ (PS4™)

An exclusive release for the Super Nintendo, Wild Guns was one of those titles that took an existing formula and polished it to brilliant levels. Inspired from arcade side-scrolling arena shooters like Cabal, Natusme's console release had it all; Wild Guns was a Co-op Western Steampunk gallery shooter with slick controls, amazing aesthetic, and a rewarding challenge.

Players control their character through arena style stages where movement is only limited to left and right; vertical movement comes from agile jumps - absolutely essential when dodging an onslaught of enemy fire. There's a cursor onscreen which acts as a targeting reticle, and this can be controlled to shoot down foes or even lasso them for a moment's breather. It's interesting to point out that Wild Guns probably had the most destructible environment in any SNES game, and behind the bottles and neon signs, there are a wealth of secrets to find. At the end of each stage, players will encounter massive bosses for a great twitch based finale of frantic shooting, rolling, and leaping.

As a re-release, changes include new stages with their own bosses, a wider variety of weapons, online rankings, and the addition of 4 players single-screen gameplay. And just to be thorough, Natsume has thrown in 2 new characters, a daschund who controls an attack drone, and a really buff baby-faced woman who could actually just be a really buff baby ;)

To see that after 22 years, and completely out of the blue, having this cult title receive a revival in Wild Guns: Reloaded is a wonderful thing for gamers. In the landscape of overly cinematic unfulfilling handholding quasi-narrative driven fetch quests that seem to be popular at the moment, it's games like this that remind us of what games use to be: pure fun!

If you are familiar with Wild Guns: Reloaded, why not let others know?

[This review is based on another version of this product]
johnarickard (1) on 24, Jan. 2020 21:43 (HKT)
Onimusha Warlords Remastered
Absolutely love the Onimusha series and the remaster of Warlords is a welcome addition to all current gen platforms. If anyone is a fan of action adventure games than I really recommend the new remaster. It is especially a treat to the older fans as it incorporates use of the analogue stick which the original on ps2 version didn't have. The only thing which is a bummer is that the original soundtrack has been replaced by a new one which isn't a bad thing as the one is still fantastic but if people had an attachment to the original soundtrack they may feel a little bummed out by it but it is only a minor thing and does not take away anything from the remasters steller return. For anyone reading this who are fans of Resident Evil( same creators of Onimusha) is a must have for action adventure fans. I spent countless hours on the remaster and hope that capcom will give the rest of the series the same treatment that Warlords got! =)
[This review is based on another version of this product]
xxdeadpeacexx2000 (13) on 19, Dec. 2019 13:45 (HKT)
Come and try this Panzer High
Ultimately, Girls und Panzer: Dream Tank Match isnt the perfect primer for Girls und Panzer, nor could anyone expect it to dethrone contemporaryporary tank sims, but taken on its own merits, it's a solidly-built, roundly enjoyable foray into the fun-loving world of Girls und Panzer, delivering a ton of fan service and some engaging combat on top.
[This review is based on another version of this product]
thomassteven40 (2) on 09, Nov. 2019 06:10 (HKT)
Awesome Port
Never got to play this on the PS2 back in the day so had to import it due to being a physical switch collector. Game is awesome. Kind of like Samurais and Sword play meet the original Resident Evil game as far as the controls. Graphics are good as it is a PS2 port. Plays in English and actually started up in English when I put it in my switch. Highly Recommend!
[This review is based on another version of this product]
Lunari (6) on 30, Oct. 2019 10:39 (HKT)
A Great Re-release
This updated release of Onimusha is really fun. The controls are modern, and it makes the game much more fast paced and fun.
[This review is based on another version of this product]
middletonbriana94 (1) on 16, Oct. 2019 22:50 (HKT)
Back Again
Despite not being able to read most the menu option its pretty straight forward to learn what each menu does. The characters are evenly balanced; including the recently added free dlc characters, Wild Blast character have a super mode that has a once per round super attack and Death Blast characters sacrifice health in exchange for power and a super attack. Most character are unlocked quite easily in mission mode; only one in arcade mode, and is an improvement from Battle legends grindy unlocks.
I recommend this game for anyone, its fun by yourself and fun with friends and family.
1 »